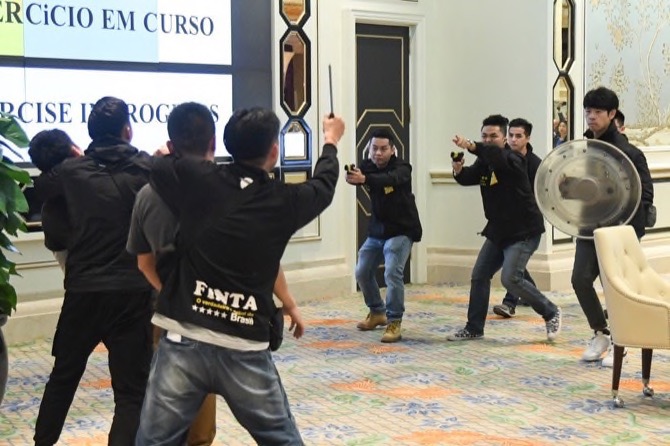 An armed attack drill is considered being held annually to simulate emergency situations in the city’s casinos, the Gaming Inspection and Coordination Bureau announced in a statement on Friday.

The announcement came after the simulation drill dubbed as Wolf Hunting 2019 was concluded at The Venetian Macao on Friday, in which emergency workers and officers from the Judiciary Police, the Public Security Police Force, the Fire Services Bureau and the Customs Service took part.

The drill on Friday simulated an armed robbery with six actors posing as criminals attacking some patrons before escaping the hotel lobby.

According to authorities, some 360 people attended the 90-minute drill.

According to Paulo Martins Chan, director of the Gaming Inspection and Coordination Bureau (DICJ), “the emergency contact system has been improved between DICJ, the casinos, as well as the police,” as cited in a report by TDM. Commenting on the drill, Ma Io Kun, commissioner-general of Unitary Police Service said, “without testing, we won’t be able to assess the effectiveness of the current system operations.

The police said in a statement that the drill included simulations of multiple injuries, a bomb threat, people being held hostage and standoffs between the police and the criminals. The drill also incorporated pepper spray for the first time.

The police also pledged that it would remain vigilant in developing the security situation by carrying out different types of exercises, enhancing the coordination capacity and joint operations of public security services and other entities to deal with possible emergency situations.

Commissioner-general Ma further added that the rise in money exchange scams has brought changes to the surroundings of the casinos.  Yet he assured that the city’s overall social order remains intact.

Wolf Hunting was designed to test the ability of public-sector departments and the local casino industry to coordinate and respond to major incidents.

Further, DICJ said in a statement that it would continue to assist the police in its simulation drills, and coordinate with the gaming concessionaires and sub-concessionaires “in order to enhance the capacity to respond to unforeseen situations.”

It added that the move is also to establish mechanisms of collaboration, and improve and optimize the supervision of casinos in a timely manner.  LV

The Macau International Airport (MIA) carried out its “Fire in the Fuel Farm Exercise 2019” on Friday, involving a simulated fire in a fuel tank caused by static electricity.

Nam Kwong Petroleum & Chemicals Co. Ltd., the fuel provider, activated the safety systems according to their internal procedures and moved the vehicles that were parked in the area.

Simultaneously, they notified all entities involved in the emergency in accordance with the Airport Emergency Plan.

The airport fire fighting station deployed their trucks immediately to the location to put out the fire. Although there were no injuries, the commander-in-chief asked for additional support from the Fire Services Headquarters and evacuated staff in the vicinity of the incident.

The exercise, which lasted for 45 minutes, was coordinated by the Macau International Airport Company Ltd.

About 230 people took part in the exercise, representing the Unitary Police, the Public Security Police Force, the Fire Services, the Civil Aviation Authority and CAM-Macau International Airport Company, amongst others.