Q& A | Shazia Imran, Artist: ‘Rather than fighting over our differences, we need to celebrate them’ 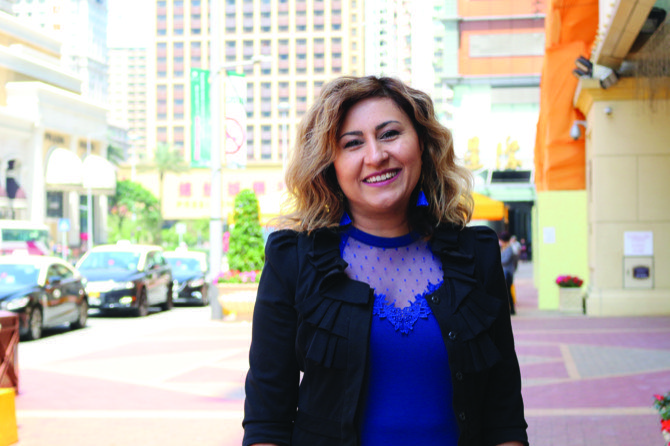 Award-winning artist Shazia Imran is in the city for the first time as she takes part in the “Women Artists – 1st International Biennial of Macau.”

Imran is an Australian artist known for her mixed media pieces, which belong to private collections in countries including Hong Kong, the United States, the United Kingdom, Singapore and Australia.

The artist – who won the Lorenzo il Magnifico Award in the 2015 Florence Biennale – has upcoming shows in Hong Kong, Dubai and London. Interviewed by the Times, she talks about the work she is showing in Macau and the struggles faced by female artists.

Macau Daily Times (MDT) – What shaped your career in the art industry and how did it all start?

Shazia Imran (SI) – When I was growing up, painting and drawing [was] a part of me. It was right within me somewhere. I didn’t take it seriously and I only thought about it as my hobby.  Eventually I started putting some paintings [on exhibition] in Sydney. Then I started winning some awards, getting recognition [and] selling works.

My life changed when I was invited to the New York Art Expo. Going to New York was an eye opener. When I was there, no one knew me but my works were up there and everyone was commenting about my work. Then, for the first time, I realized maybe I’m really good at this. […] When I won an award in the 2015 Florence Biennale, that was such an encouragement and that shaped my career in art.

MDT – Tell us about the art piece that you chose to bring to Macau.

SI – My works are in different parts of the world and I only have two pieces left with me and they [the organizers] selected the “Divine Bliss.” My work mainly depicts harmony and peace. I’ve started studying different communities [and] looking at what people believe in. A lot of people believe in religion, have different communities and different ways of living. And then I did react towards what is happening in the immigration world like when [US President] Trump said [that] immigrants should not come to the U.S. and the Australian government is also a bit strict in immigrant policies.

I’m just trying to make a point that we’re all human beings and we’re all the same. Rather than fighting over our differences, we need to celebrate them. I started to look at monumental buildings in different countries, picked some elements and started looking at the elements that are the same in different cultures. I used a circular shape of [a] mandala in my work, which represents the universe.

Going back to my theme, it basically shows that we are in one universe and all humans. The mandala represents one central point.  […] The mandala brings everything together. All the threads show connections. So we’re all connected, no matter where we are. Due to globalization, social media and all that, we are so close and we’ve never been this close before. I [also] used gold to show that we need to celebrate the glamorous nature of different cultures.

MDT – Can you say that your art pieces comment on current political or social issues?

SI – I don’t focus on social [and] political issues but immigration was a kind of kick for me. I want to focus more on the unity of mankind, identity and more towards harmony and peace. That’s the main message I want to convey in my works.

MDT – Are there still influences from your culture that can be seen in your artworks?

SI – Wherever I go, I think I get inspired by my surroundings. It’s important to go somewhere when I paint any city or building because then you are meeting people, walking through, smelling, and feeling the space. It all influences your decisions. I try to pick some elements in the culture and depict that.

MDT – Do you have any plans to base an artwork on Macau’s landscapes?

MDT – What are the challenges of being an artist, noting the increasing competition in the art world?

SI – The world is really materialistic nowadays. We measure things very differently. We measure it in [the] amount of money, [which] job is good, and where you can [make] money. I experienced the same thing. I didn’t even think I [was] going to be a professional artist. It took me a long time to call myself an artist [as] I was working in the digital marketing field. For me the process of creating art is more important than anything else. I’m really lucky my work is selling and [that it’s] in high demand but I don’t focus on sales that much, it just happens. But the most important thing is when I’m working, when I’m doing that process of creation. That’s really important for me. It gives me so much pleasure and happiness in my life.

MDT – Does the stigma, particularly in Asian countries, accompanying the choice to be a professional artist remain?

IS – I never thought that painting [would] become a career for me. On my dad’s side, all of them were lawyers and judges, while my mom’s side [were] all engineers and doctors. So it’s in Asian society; growing up you think that you have to become someone important. Being an artist wasn’t even a thought, so I just [did it] as a hobby. But [there is a need] to prove that wrong. You can [make] money from art and be successful and find happiness.

MDT – Do you find it a struggle for women to showcase their artworks?

IS – Definitely. […] I heard that people give less money but [say] that you need to believe in yourself. My message to all females is you need to believe in yourself and then everyone will believe you. Personally speaking, I don’t focus on what other people are doing; I don’t compare myself with other artists. I focus on myself. Everyone has their own part [to play] and [as long] as you are happy with the way you are going, [you] will get to that point of happiness. I say to my fellow artists or emerging artists that you need to understand what success means to you. It’s not only money, it’s so many other things. It’s just your own measurements: how you measure success and happiness, that’s what counts.

MDT – So women are still underrepresented in the art world?

IS – They are definitely underrepresented, especially in Asia. I’ve seen it’s a fact, but saying that, I just go with what I do. […] The biennale is an amazing opportunity. I would highly commend them [the organizers] on this role. It’s such a beautiful exhibition.

MDT – You have been to a lot of art biennales in different countries and cities, how do they compare to Macau’s first edition?

IS – I think your first edition is amazing; it’s a very good job. It looks really professional, the artworks, museums and all the artists that are selected have some really amazing works and I’m really proud to be part of that. […] It actually sort of promotes female artists from all around the world and gives them a bit of recognition as well. It’s really an amazing step.

MDT – What can we do to further support emerging women artists?

IS – Having biennales that [provide the] opportunity of doing that [showcasing women’s artworks] is amazing.

I would also say that authorities need to support these initiatives. Not only for females, but for art as well. Art should be part of everyone’s lives. 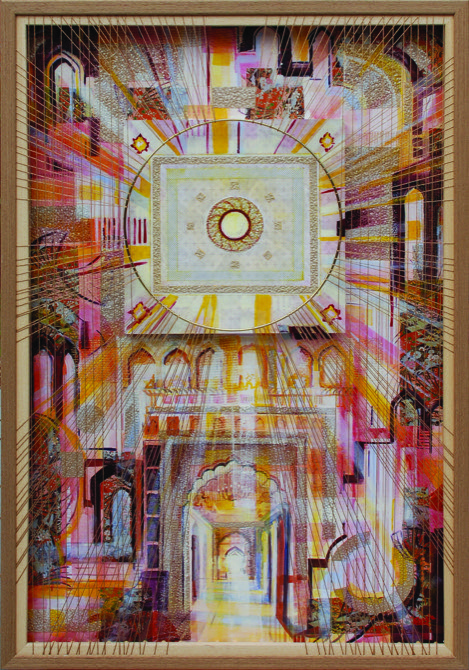 Divine Bliss, an artwork by Shazia Imran showcased in the Biennial