LOS ANGELES (AP) — Show Bits brings you the 87th annual Academy Awards in Los Angeles through the eyes of Associated Press journalists. Follow them on Twitter where available with the handles listed after each item.

If you were a betting man or woman with a penchant for offshore wagering, the Oscar odds would be ever in your favor if you backed Julianne Moore for best actress, J.K. Simmons (best supporting actor) and Patricia Arquette (best supporting actress).

But don’t expect a fortune. The three were such front-runners that a $100 bet would only win you a dollar. 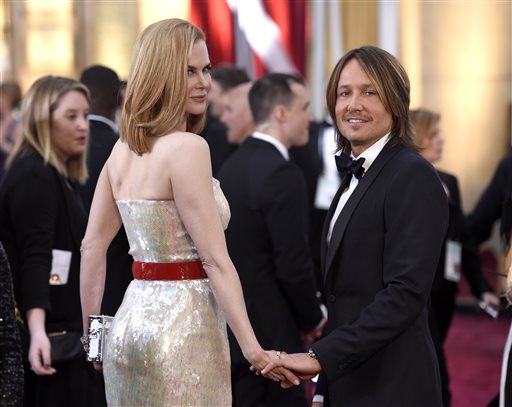 As the Maroon 5 frontman and “The Voice” judge performed his Oscar nominated song “Lost Stars” from “Begin Again,” the “Queen of the Desert” and “The Hours” actress tapped her heel-clad foot and sang along.

While most Academy Awards attendees quietly watched Levine’s performance, Kidman knew every single word. She wasn’t totally alone though: hubby and country crooner Keith Urban backed her up a bit.

“The most important thing is to have a ginormous team of professionals making you look beautiful” — actress Margot Robbie on what it takes to look great on the Oscars red carpet.

Ethan Hawke, who played the father in “Boyhood,” said he was stunned by “the reality of what’s happened with this movie.”

It was shot over 12 years with the same cast growing older in real time and was nominated for six Oscars, including best film.

“This movie started as a dream 12 years ago,” he said on the Oscar red carpet. “What if? What if? It seemed so ludicrous.

“The biggest challenge is figuring out how to make the people have a continuity to them so they’re changing but they don’t seem like different people,” he said of playing the same character over 12 years.

“About two years ago I got frustrated with what I was seeing coming down the pipeline. I decided I would read some books and bring stronger leading roles (for women) to the screen.” — Reese Witherspoon on why she started her own production company and made “Gone Girl” and “Wild.”

Ellen DeGeneres may have taken the selfie of all selfies at last year’s Oscar show. But this year’s Reese Witherspoon snaps were the hit of the red carpet fan bleachers.

In an off-shoulder black and silvery grey gown, Witherspoon took grinning photos of herself in front of the bleachers as fans whooped with delight.

It was a father-daughter date for the Oscars: Laura Dern, nominated for her performance as the free-spirited dying mother in “Wild,” came with her dad, Bruce Dern.

“Amazingly I’ve never come without one of my parents, both as a nominee and as a child supporting them,” said the best supporting actress nominee. “It’s very beautiful to share the history of film and the Academy along with my family.”

Her mother is Diane Ladd.

Said her father: “I can’t be prouder. She started when she was 9. She wanted to know what was the drill. I said, ‘You gotta learn how to dance and take risks.'”

In “Wild,” Dern’s daughter is portrayed by Reese Witherspoon, who was nominated for best actress.

“I’m proud to (be among) two of the 47 women nominated tonight,” Dern said. “May we see that number double.”

FIRST TO FIND HIS SEAT

The award for first celebrity to take his seat inside the Dolby Theatre goes to Terrence Howard.

The actor, accompanied by his wife, was the first famous face to scope out the Oscar venue ahead of Sunday’s show. He was followed closely by Oscar winner Octavia Spencer, who immediately walked over to greet the star of the TV series “Empire.”

Howard didn’t stay put for long. An usher came over to inform the actor that no glass was allowed in the theater and he’d have to dispose of his drink.

He quickly headed to the lobby to do so.

DIVERSITY IN EVERY WAY

“Every facet of life, whether institutions or the nation in general, should reflect what society is composed of, not just racially, but in terms of sex, women, young, old,” the star of “Selma” said on the Oscar red carpet.

Although “Selma” was nominated for best movie, Oyelowo, who played Martin Luther King Jr in the film, was passed over, something many considered a snub.

LOOKING FOR SOME LAUGHS

Marion Cotillard, nominated for best actress for her emotional portrayal of a woman struggling with depression in “Two Days, One Night,” says she’d actually like to start doing comedy.

“I hope we’re going to see more of me in comedies,” she said on the Oscar red carpet. “I wish I can find my way into comedies. Sometimes it’s hard to live with dark … characters all the time.”

She added that she didn’t see the movie as just a woman’s story, although it relates the struggles her character faces to hold onto her factory job.

“She’s a woman, but I don’t think it’s just a struggle of a woman,” she said. “Men and women can face the absurdity of our society’s choosing money over human people.”

“You have to greenlight more stories that include people of color … You can’t get nominated for anything you’re not in.” — Viola Davis, asked about how to improve diversity in Hollywood.

“I’m just going to play dark, complex characters from now on, even in comedies. They’re not going to be funny, they’re just going to be dark and complex” — actor Steve Carell, who’s known for comedy but was nominated for best actor in “Foxcatcher,” a drama.

CALM BEFORE THE AWARDS

While the red carpet is chaotic outside, it’s mostly calm within the Oscar ceremony’s home.

As attendees sip cocktails in the lobby, stagehands are doing some last-minute hammering on the stage and vacuuming in the aisles inside the Dolby Theatre.

Meanwhile, Neil Patrick Harris is also in the midst of some final prep work for his first turn as Academy Awards host.

The “How I Met Your Mother” co-star changed out of the grey tux he was sporting minutes ago on the red carpet and into a pair of jeans and a shirt with the sleeves rolled up.

Harris is running through a bit of jazzy choreography in the middle of the stage, a final run-through before Hollywood’s biggest night begins.

Even rain pouring down on the Oscar red carpet through gaps in the huge tent covering it couldn’t keep stars from Adam Levine of “The Voice” to comedian Andy Samberg to “Birdman” star Michael Keaton from giving fans in the bleachers what they wanted: some cheekiness.

Levine, with his striking model wife, Behati Prinsloo, pointed to himself, mouthing “Me? Me” as fans screamed “Adam!”

Keaton smiled and saluted the crowd.

“You guys, there’s a little bit of a drip, so mind the drip,” joked Samberg.

Unfortunately, that drip turned into a waterfall next to television cameras on the red carpet. A blue tarp brought out to block the rain kept it from hitting coifed actresses such as Marion Cotillard and Zoe Saldana.

The downpour was big enough to impress even people from Ireland.

“We’ve had bad rain, but this is really heavy!” said Emma Cotter, 40, visiting from Cork, Ireland, with her sister Laura.

QUICKQUOTE: J.K. SIMMONS (Winner of First Oscar of the nite: Best Actor in a Supporting Role in “Whiplash”)

“People who are from foul weather climates know how to dress for the weather” — J.K. Simmons, who grew up in the Midwest and West, sporting a black fedora as rain poured during the red carpet portion of the Oscars.

“We’ve become this brotherhood, this gang of directors” — Morten Tyldum, director of “The Imitation Game,” on meeting other directors as part of the run-up to the Oscars.

“It was surprisingly easy. Everyone asked would people lose interest and drift away. It kind of went the other way. They care more and more about it.” — director Richard Linklater about making his Oscar-nominated film “Boyhood” over 12 years.

The first to arrive on the Oscar red carpet are likely to be a small army of publicists trying frantically to draw attention to their not-really-famous actor clients.

Some will hold up signs with a nominee’s name and a list of film credits to help those reporters thinking to themselves, “That guy looks familiar, but … ”

Sometimes they are turned away with a curt nod by a reporter or producer and they’ll fade into the crowd. Moments later they’ll be back, looking for another media pack to pitch.

“It’s like losing your virginity, you gotta goof it.” — Andy Samberg about his appearance at the Oscars performing “Everything is Awesome” from “The LEGO Movie.”

Anna Kendrick just brings something out in fans in the Oscar bleachers that line the red carpet before the show.

The crowd howled its approval when Kendrick, wearing a peach-colored gown, flashed a devil’s sign at fans in a saucy move not entirely unexpected of the “Pitch Perfect” actress.

“My heart melted, and I wanted to jump over the barricade, say hi, and sing with her!” gushed UCLA student Emilio Huerta, 19, who was sitting in the stands with his mother, Ofelia Huerta.

“She’s so cool and relatable,” he added, grinning widely.

Singer Glen Campbell’s wife said she’s hoping for an Oscar win for him even though he probably won’t understand what it means.

“I’m not sure if he’s really aware but he will be at his own little Oscar party tonight. It would be lovely to go back and let him hold one. It’s just hard for him to understand,” Kim Campbell said on the red carpet before the show.

Campbell, who has Alzheimer’s, is nominated for the song “I’m Not Gonna Miss You,” which Tim McGraw was scheduled to perform during the show. The song is featured in the documentary “Glen Campbell, I’ll Be Me.”

Just like the freeway that carried some of them to the show, there’s even a fast lane for those who walk the red carpet at the Oscars.

It turns out the famous fabric is divided into three lanes.

The one you want to be in, if you’re really famous, is the Diamond Lane.

On the other side of the carpet is the one for people herded away from the TV cameras and reporters because nobody knows who they are anyway.

If it had a moniker it might be the No-Name Lane.

IN SEARCH OF CELEBS

Moments of pouring rain didn’t faze Jana Kahn, who traveled all the way from balmy Palm Beach Gardens, Florida, with her teen daughters and husband to join other celebrity-loving fans in bleachers above the Oscars’ red carpet.

Clear plastic tents shielded fans and the carpet itself from alternating periods of stormy weather and bright sun.

“I’m just trying to absorb everything!” said the 50-year-old red-headed mom of the family’s first time at the Oscars. Her equally red-daughters Tegan, 15, and Alexandra, 11, seated next to her on metal benches, chatted happily about the possibility of seeing Johnny Depp and Jennifer Lawrence.

All of them sported freshly painted sparkly nails.

“Johnny Depp is my favorite person ever!” said Tegan, grinning. “I love him. He’s an amazing actor.” 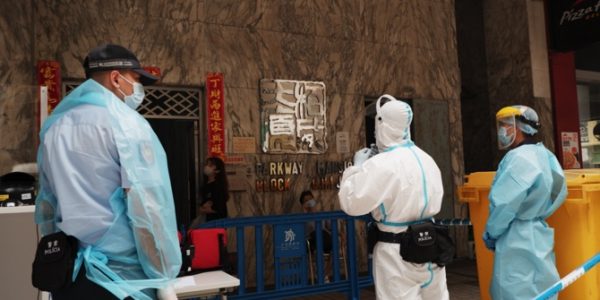 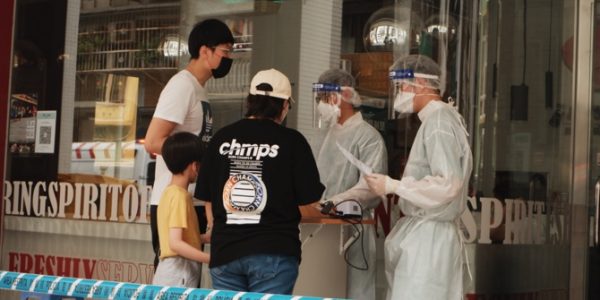