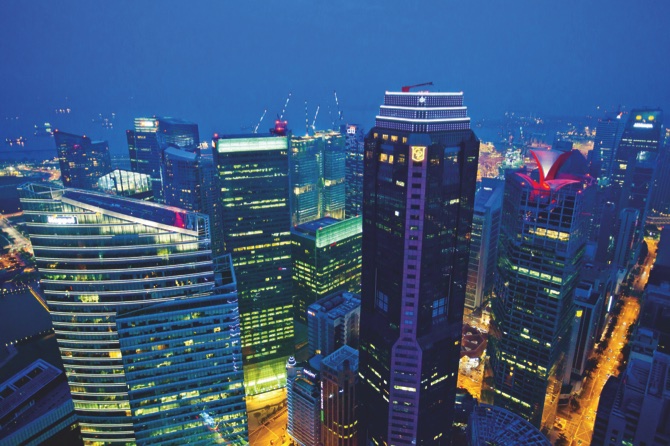 Singapore has done it again. The city-state beat New Zealand to rank first in a survey of expat destinations for the second year running. Among nearly 27,000 expats in 190 economies, Singapore is the best place to live, work and raise a family abroad, according to the latest and ninth edition of HSBC Holdings Plc’s annual Expat Explorer report.
While New Zealand came close to Singapore in most areas, what dragged down its ranking was economics – the category covering earnings and career prospects. New Zealand was rated 41st for personal finances in the survey, far behind Singapore’s eighth place under this metric.
No other Asia-Pacific economy made it to the top 10 overall ranking of expat destinations, with Australia, Hong Kong, Taiwan, Vietnam and Japan rounding up the top 20. The U.S. placed 30th overall.
Here’s a breakdown of why Singapore is the favorite:

Money and Economy – Expats in Singapore earn on average about USD139,000 annually, 43 percent more than the global average. Expats in Hong Kong are paid even more, at $170,000. Switzerland is the top country for personal finances, with annual incomes averaging $188,000.
The highest-paid expats live in Zurich, where more than two in five earn over $200,000, compared with almost one-third in Shanghai.
Expats in Singapore are the most assured about the economy of their adopted country, with almost three-quarters saying they feel confident, compared with 52 percent in the Asia-Pacific region.
Quality of Life – Here is where New Zealand beats Singapore – in overall experience. New Zealand tops the category, which includes quality of life and ease of social integration, with Singapore coming in at fourth place.
Almost three-quarters of expats in New Zealand say they’ve achieved the goal of improving their quality of life, beating the global average of 52 percent.
Expats consider Japan to be the world’s safest country, followed by Singapore and South Korea. More than eight in 10 expats living in Singapore feel safer than back home, compared with 52 percent globally.

Career Prospects – More than six in 10 expats working in Singapore believe it is a good place to advance their careers. Singapore ranks second behind Hong Kong. China, in seventh place, and India, in ninth, are the only two other Asian countries within the top 10. New Zealand is in 18th place.
About 58 percent of expats in Singapore say it is a good place to start a business, beating the global average of 38 percent.
London and New York attract executives looking to boost their careers. More than 70 percent of expats in both cities say working there will improve their job prospects when they return home, surpassing the 46 percent globally.

Family, Education – Sweden remains the best place in the world for families abroad, taking the top spot in the overall family category including school and childcare quality and cost of bringing up kids. Singapore is in third place and New Zealand in fourth. Taiwan, Thailand, Hong Kong and Australia round up the Asia-Pacific entries in the top 20.
Singapore’s quality of education is rated the best in the world. Among expats in Singapore, 75 percent consider the quality of education there better than in their home country, compared with 43 percent overall in the survey. New Zealand ranks eighth, followed by Japan in ninth place and Hong Kong in 11th. Livia Yap, Bloomberg