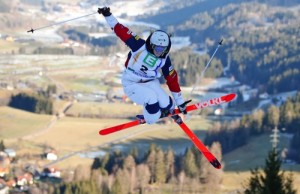 Hannah Kearney from the U.S. competes to place second in the women’s freestyle skiing single moguls final event at the Freestyle Ski and Snowboard World Championships in Kreischberg, Austria

American freestyle skier Hannah Kearney won the world title in dual moguls, while Mikael Kingsbury of Canada earned the men’s gold medal yesterday.
It was Kearney’s 10th medal and fourth gold at a major championship. She won the world title in moguls in 2005 and two years ago, but it was her first triumph in dual moguls.
“I’ve never won the dual world championships, it means a lot to me,” Kearney said. “Ten years ago, I won my first world championship gold medal. To stay at the top for ten years, I’ve got to thank my trainers, my coaches, for helping me achieve that.”
Kearney defeated Justine Dufour-Lapointe in the final by 29-6 points, a day after the Canadian beat Kearney in the moguls final.
“It’s great to have a next day when you are a little bit disappointed,” said the American, who has won 43 World Cup events. “It was a bit faster today and I felt stronger with every run.”
Yulia Galysheva of Kazakhstan edged defending champion Chloe Dufour-Lapointe of Canada 18-17 for the bronze medal. Chloe Dufour-Lapointe was beaten by her younger sister Justine in the semifinals.
Kingsbury defeated fellow Canadian Philippe Marquis 20-15 in the men’s final for his first world dual moguls gold after finishing runner-up twice.
Kingsbury bounced back from losing his moguls title Sunday, when he was upset in the final by Anthony Benna of France.
Marc-Antoine Gagnon made it a Canadian podium sweep by beating Sho Kashima of the United States in the small final.
The next medal events of the freestyle skiing and snowboard worlds are the slopestyle finals for both disciplines tomorrow. AP