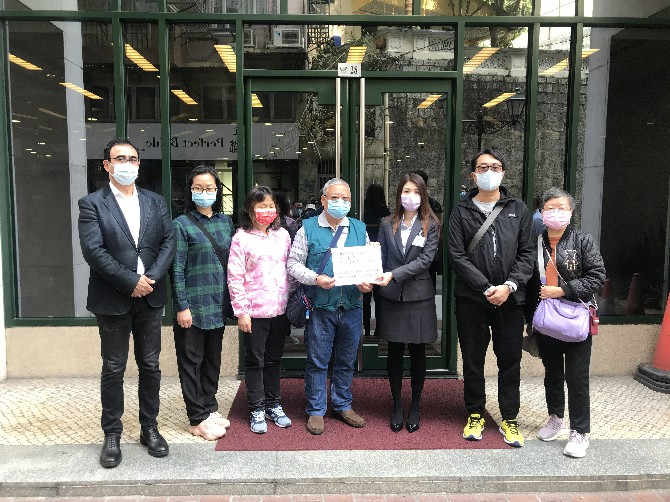 Owners of residential properties at Edifício Ip Heng have filed a complaint to the Chief Executive against the local government in relation to their prolonged issues with falling tiles.
Over 10 individuals, all owners of houses at Edifício Ip Heng, delivered a letter yesterday to the Government Headquarters outlining their complaints.
According to two of the group’s representatives, surnamed Tai and Dou, this winter alone has seen 1,089 incidents relating to falling tiles at 1,084 locations along corridors at Edifício Ip Heng.
Edifício Ip Heng consists of ten towers, all of which have been afflicted by falling tiles.
In March 2013, the individuals became home owners at Edifício Ip Heng. They have dealt with falling tiles and associated issues every winter since.
According to Tai and Dou, in the beginning when the properties were still covered by warranty, the housing authority “fixed the problem impetuously every time, and the government never considered hiring a third-party to re-examine whether the corridor design was safe.”
“Moreover, the Housing Bureau never proactively discussed with residents of Edifício Ip Heng. It has always closed its eyes to the demands of the residents,” the letter to the Chief Executive reads.
The problems with tiles falling were never improved, according to the group.
The housing project is no longer covered by warranty. These property owners estimated a cost of 30 million patacas will be required to fix the problem.
“We request the Chief Executive to look squarely into the quality problems of Edifício Ip Heng, to dispatch personnel to investigate the situation, to solve the problems promptly, and to assess the real cause behind the tile falling situation. We hope that the government can cover the repair fees,” the group said.
Edifício Ip Heng is not the only government-subsidized building to have falling debris over the past few years. Edifício do Lago has frequently had reports of similar incidents.
However, earlier this month, the housing authority responded to the property owners, stating that both Edifício Ip Heng and Edifício do Lago were no longer under warranty, the owners were responsible for repairing common areas.
Under the current law, construction defects of government-subsidized housing are covered by a warranty for two years after the title passed to owners.
Last December, the Legislative Assembly (AL) passed a law that extended the warranty to a period of ten years for the building structure and groundworks and five years for other facilities.