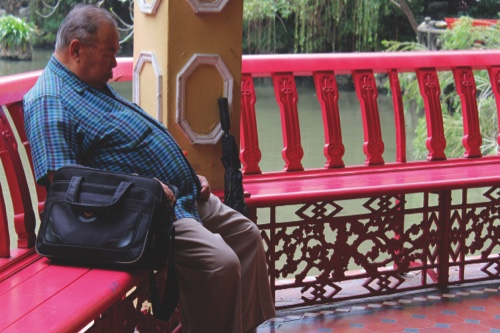 The government plans to implement measures that encourage residents to postpone claiming their pension until reaching the eligible age of 65. Currently, over 57 percent of beneficiaries choose to withdraw their pension in advance after they turn 60.
According to the Social Security Fund (FSS), about 40 percent of recipients who have withdrawn their pension in advance also have jobs. In response, it will retain the current scheme  for early pension withdrawals, but suggests raising the default retirement age of 65.
The FSS released a Towers Watson report yesterday that examines Macau’s advance pension issuance scheme. The report suggested that it would be fairer to lower the percentages of payment for early withdrawals, whereas the FSS has decided to maintain the current percentages at the present stage.
The current scheme stipulates that eligible elderly persons can receive a full pension from the age of 65. It also allows the beneficiaries to withdraw their pension from the age of 60, but with a deduction based on the age at which they apply. However, the deduction will be exempted once the beneficiaries reach the age of 80.
“Macau’s early-withdrawal pension scheme is very special and offers more favorable treatment,” said Towers Watson actuary Ms Yvonne Sin, when presenting the report’s results. “From an actuarial perspective, the scheme is rather a generous arrangement.”
According to Ms Sin, the payment percentage adopted in Macau’s scheme doesn’t consider the beneficiaries’ chances of survival; it assumes that the beneficiaries will inevitably live until they are 80.
“Based on a more reasonable actuarial assumption, beneficiaries who apply to withdraw their pension at the age of 60 should receive 72 percent of the full amount, which is a lower percentage than the 75% under the current system,” she added.
In response, the president of FSS’s administrative committee, Ip Peng Kin, said that it is hard to accurately quantify factors such as the beneficiaries’ chances of survival; if adopting the calculation method suggested in the report, the FSS will need to consult actuaries regularly to update the indicators.
“The government belives that at the present stage, maintaining the current percentages is more feasible and more conductive to the public, as that can maintain the system’s stability and avoid confusing the residents,” he stated.
The president also said that the government is inclined to increase the participants and their employers’ contribution to the central provident fund, which is in accordance with the actuarial report.
In addition, he acknowledged the necessity of establishing an adjustment mechanism for the pension system, introducing multiple indicators such as the inflation rate. Brook Yang