Society grapples with question: should Macau close its borders? 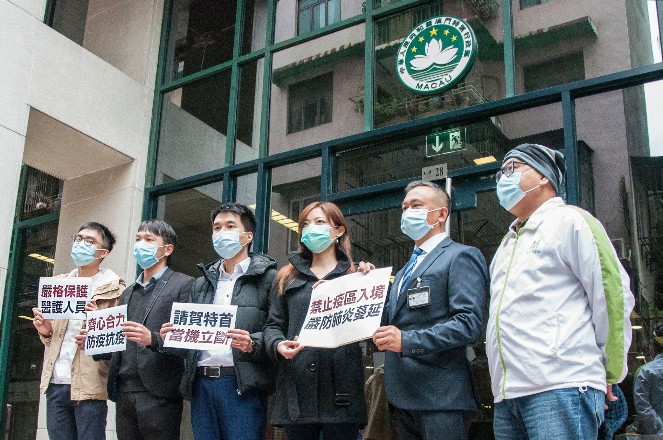 Border control measures have been a topic of heated discussion since the outbreak of the novel coronavirus (2019-nCoV) on the mainland.
While several sectors of civil society have started to demand action from the local government, especially concrete measures to stop those arriving from the most affected areas in the mainland from entering the Macau SAR, the government has refused a complete ban on Chinese residents. Instead, it has presented measures designed to reduce the risk of disease spread, enforced according to the guidelines of the central government.
Now that may be changing as Hong Kong last night announced a near complete shutdown of entry and exit ports with the mainland.
In Macau, leading the call for a complete closure of the border to mainland residents, especially those arriving from Hubei, are lawmakers Sulu Sou and Agnes Lam. Both lawmakers handed petition letters to the government calling for added measures on border control to effectively prevent further propagation of the virus within Macau.
Social affairs commentator Larry So told the Times that he agrees with the appeal coming from civil society and its representatives.
“I think the border should be more restricted in the sense that when we have a lot of people going out or coming in, this contributes to a [possible] continuous flow of the virus in and out of Macau. This is not contributing to the control of the virus spread,” So said.
So shares the opinion that the need for non-resident workers (TNR) who live in the mainland but cross the border daily is one of the bigger obstacles to enforcing added restrictions, but he also believes that this could simply be solved by allowing TNR to still use the border as an exception.
Asked whether such a decision would require a nod from the central government in Beijing, So said, “I think more than an approval, this is more a case of coordination.”
“I think if the local government discusses this [matter] with central government authorities, they would give their blessing to implement this easily,” the local commentator said. However, he noted that if there was any objection from the central government, the local government would still be in a position to negotiate.
So also thinks that the central authorities would be unlikely to object because “the mainland has been the most actively concerned in installing controls and bans for the protection of the health of the people either in mainland China or in Macau and Hong Kong. These are the main objectives established and I don’t think they will object.”
So said a blanket ban would be simpler and more agreeable as a border control measure – even if it only targeted certain Chinese provinces or regions – than the existing measures, which change from day to day and are complex to enforce. One such example is the requirement for medical certificates and proof of quarantine or travel history.
An online petition headed by Lam calls for a complete ban on entry to all Chinese citizens. It gathered a total of 20,000 signatures of local people in just one hour, according to its organizer.
Lam also informed that the petition asked respondents if they agreed with closing the borders to all people for a period of two weeks, with the only exceptions being granted to Macau residents and non-resident workers that live in Zhuhai and cross the border on a daily basis.
Speaking to the media at the time of the petition’s delivery to the government’s headquarters on January 26, Lam expressed the feeling that the number of infections in Macau could have been reduced or even stopped right from the start if the government had implemented border control measures faster when the outbreak became known.
“[If the government] had adopted more stringent control at an earlier stage, we could have had the opportunity to prevent cases of local infection,” she said.
In yesterday’s government daily press conference to present updates on the coronavirus status, the Secretary for Social Affairs and Culture, Elsie Ao Ieong U, said in reply to a question from the media, “We have other measures already planned [for border control] but we will announce them in due time and only if the situation justifies it.”
Regarding the possibility of closing the border crossing to the TNR living in the mainland, Ao Ieong said, “All companies should assume their own responsibilities to fight the coronavirus. The government-taken measures alone are insufficient.”

Hong Kong is sealing off more checkpoints with China in order to contain the spread of the deadly virus that’s claimed more than 360 lives in the mainland, as medical workers in the city began a strike aimed at forcing the closure of the border.
The city has closed more of its ports of entry effective today, including Lo Wu, Lok Ma Chau, Huanggang, and the Hong Kong-Macau Ferry Pier, Chief Executive Carrie Lam said at a briefing yesterday, adding that China had already stopped issuing visas to Hong Kong as part of the containment effort.
The new measure would leave only three border checkpoints in operation: Shenzhen Bay port, the Hong Kong-Zhuhai-Macau bridge and the airport, Lam said. Passenger traffic at those ports of entry accounted for 63% of all visitor arrivals Sunday, according to statistics on the Immigration Department’s website.
Lam said the total number of people coming from mainland China and Macau, excluding those arriving from the airport, had dropped 57% to 73,019 yesterday, versus 170,991 on Jan. 29, the first day the city’s border control measures came into effect. MDT/Bloomberg