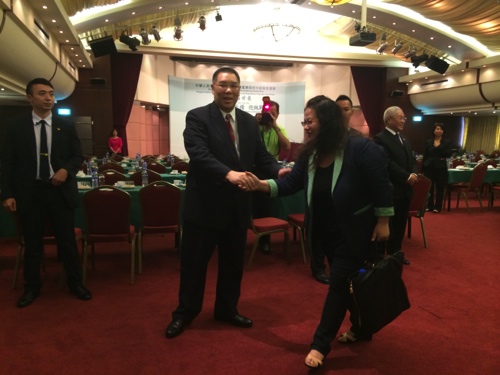 The Chief Executive election candidate, Mr Chui Sai On, has said that the opinions of Macau’s residents need to be heard before the government can move forward to introduce tougher penalties on drug crimes. Yesterday morning, he met with Electoral Committee members from the third sector – including representatives of the labor, religion and social assistance sectors – who voiced concerns over increasingly high rates of drug abuse.
An Electoral Committee member representing the social assistance sector said that Macau’s society is becoming increasingly complex, and so is the mindset of its young people. “More and more young people are abusing drugs and refuse treatment,” he pointed out. He also posed a number of questions to Chui Sai On regarding any plans to launch further preventative measures, such as increasing penalties or providing a compulsory drug prevention program in schools.
Chui said that a response to drug-related issues would depend heavily on cooperation from schools, as well as education and guidance from parents at home.
In order for the government to increase penalties or introduce a compulsory drug prevention program in schools, he said that residents’ opinions on the matter would first need to be heard.
When questioned about the possibility of improving schooling conditions and providing more sporting facilities, the candidate acknowledged that the quality of education could be improved. “[We can work on sporting facilities’] that could be used by several schools,” he added.
Several Electoral Committee members expressed concerns about the increasing number of non-resident workers. Some advocated an “exit scheme” for these employees, which they claim would be useful during a financial crisis, to ensure that residents would keep their jobs.
A representative of the labor sector accused the CE of not complying with policies on transportation. He insisted on the need for a written promise from the Chief Executive, precluding non-resident workers from taking up jobs as drivers in Macau.
Another labor sector representative demanded the implementation of further mechanisms to introduce an “exit scheme” for non-resident workers, as well as the introduction of measures to regulate imported labor.
A representative from the social sector raised similar concerns, saying that many non-residents workers do not speak local languages, and that there should be a system in place through which they can be dismissed. “If there aren’t mechanisms [ensuring that they leave Macau], young people cannot progress [in their careers],” he said.
The CE candidate pointed out that there is still a demand for more drivers, yet non-resident workers have not been hired for these job vacancies.
Chui Sai On said that such “an exit scheme” for non-resident workers is an important topic for the new government to handle. He recalled that in case of a crisis, non-resident workers would be dismissed first, so that residents are able to keep their jobs.
Other Electoral Committee members advocated the introduction of new measures to tackle inflation as prices rise each year. Chui said that the government has already heard the public’s demands on the matter, but promised to revise legislation and to improve transparency so that people can be better informed about the origin of food products.
The Chief Executive also reiterated that salary increases should always keep pace with inflation.
A representative of the labor sector campaigned for better career prospects for Macau’s hotel chefs and cooks. Chui suggested that cooks should improve their foreign language skills and think of increasing communication with larger hotel chains.
A 400-member Electoral Committee will elect Macau’s next Chief Executive on Sunday.

Father Hung Chi Kong, who attended yesterday’s meeting with the Chief Executive candidate, told reporters that the unofficial referendum “is good.” When asked about the poll launched by three pro-democratic associations, Father Hung Chi Kong replied that if these organizations want universal suffrage in 2019, it would be a good thing, “as we all want a better Macau.”