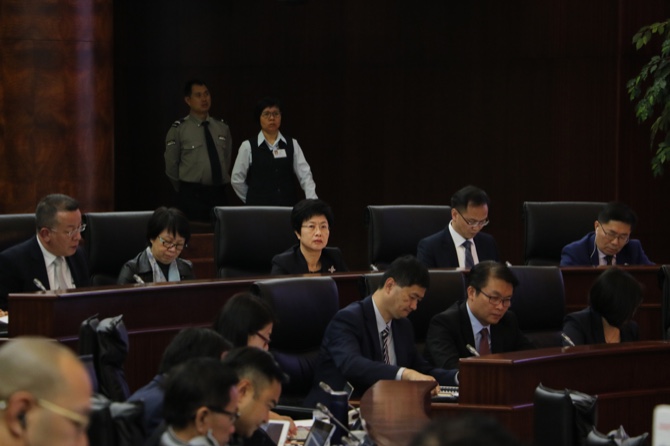 The Secretary for Administration and Justice, Sonia Chan was yesterday at the Legislative Assembly (AL) to present her Policy Address for the fiscal year of 2019, following the general presentation made by Chief Executive (CE) Chui Sai On last week.

In fact, the Secretary chose to focus more on a review of the works of her Secretariat during the year 2018 than to present concrete measures or topics which she plans to address in the year to come.

“In 2019, the area of Administration and Justice would continue to work further on the several policy measures, based on the existing works,” she noted before enumerating a number of measures in which Secretary Chan believes the government has been very successful in 2018. Specifically, she mentioned the creation of the new Municipal Affairs Bureau (IAM), which will be officially created from January 1, 2019, and the development of the Electronic Government (e-gov) in relation to the general planning for 2015-2019, for which Chan claims 86 percent of the works have already been concluded.

That was an opinion not shared by several lawmakers, who claim precisely the opposite – among them Ma Chi Seng, Si Ka Lon and Ella Lei, who questioned the Secretary on the real effects of such works.

On the topic and referring to the figures presented previously by the Secretary for Economy and Finance, Lionel Leong, Lei said, “the increase in the number of workers [public servants] proves that the ‘electronic government’ is not working and there is no simplification of procedures,” adding, “there is no efficiency and more and more workers will be needed, costing more and more money to the public coffers.”

Lei remarked that the government has been advertising the electronic government for many years but the concept has not moved from the project stage to a real implementation.“It’s far below the expectations of the population,” she concluded.

The creation and the expectation of the work of the IAM was also a highlighted topic at the plenary session with lawmaker Ma calling for a timetable for the publication of the list of members that will compose the Advisory Council of the new bureau.

In reply the Secretary advanced that the list will be revealed next month. “In December we will conclude the process and disclose the list of the selected members as well as the justification for why they were chosen,” the Secretary said, noting that there was a high number of applicants from which, “60 percent are people below 45 years old, which means that the younger people are interested in participating.” Chan also said “all sectors of society would be represented.”

Another area of interest for the government will be the extension of visa-free access to countries in the American continents for Macau passport-holders. “In 2019 the government of the MSAR will continue to prioritize the negotiation with American countries over the reciprocal access to visa-free entry” for Macau passport holders, she said, a measure that according to Chan was already extended to 141 countries and regions in 2018.

In regards to leisure and recreational areas soon to be placed under the authority of the IAM, the Chairman of Administration Committee of IACM, José Tavares announced that the bureau has plans to build in 2019 “a bicycle path in the mountain area, starting around Seac Pai Van park” as well as a refurbishing of the streets and sidewalks around Nam Van Lake and the creation of a new pedestrian path in the area of the Taipa Houses-Museum, “to enhance the environment in the area and allow visitors to appreciate the flowers and plants.”

Further into the session, lawmaker Sulu Sou provided his own calculation of the performance of the Secretariat of Sonia Chan in 2018, noting, “according to your plan and from the 11 noted topics, seven of them have not even reached the AL yet.”

“Besides that, there was very little transparency in the way other topics were approached. It looks like the government is purposely delaying the policies that interfere directly with people’s lives,” he said, naming for instance the policy to implement a tax over the use of plastic bags, among others.

One of the measures that Secretary for Administration and Justice Sonia Chan announced is the end to some lower career indexes for civil servants, who will now move to the upper level.

On the sidelines, lawmaker José Pereira Coutinho expressed his satisfaction but noted that it is just a small victory.

“This is a war that is not over yet. The government takes advantage of this [lower salary index] to put workers to do the work of higher salary indexes [but] paying less,” he said, adding, “the fight will continue because at this very moment, the government is paying [for example] the index 350 for the staff members with bachelor degrees and as far as I know there is no such degree anymore. Taking into to account that in Macau there are enough vacancies for university courses we can’t understand why they want to keep this index. In fact, these people are hired over this index but in reality they are performing tasks of licentiates from the 430 [salary] index,” the lawmaker said.

Coutinho also noted that there are many other cases in which public servants are being harmed in their rights by “exploitative” index tables that do not match the work that these people are performing.