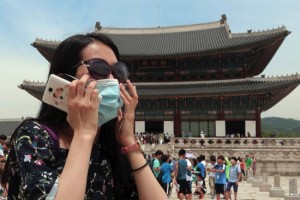 More than 680 people in South Korea are in isolation after having contact with those infected with a virus that has killed hundreds of people in the Middle East, health officials said yesterday.
South Korea has reported 17 cases of Middle East Respiratory Syndrome since a man tested positive following a trip to Saudi Arabia and became the country’s first MERS patient earlier this month. The virus in South Korea has so far been largely limited to those who stayed at the same hospital with the first patient before he was diagnosed, their family members and medical staff who treated the first patient.
South Korean Health Ministry official Kwon Jun-wook told reporters yesterday that 682 people who had close contact with the patients, such as their family members and their medical staff, were isolated at their homes or state-run facilities to prevent the spread of the disease.
Ministry officials said the number could rise.
In addition to the 17 cases of MERS in South Korea, the son of one of the patients became China’s first case of the virus last week after having traveled to the country despite being told by doctors to cancel his trip.
MERS was discovered in 2012 and has mostly been centered in Saudi Arabia. It belongs to the family of coronaviruses that includes the common cold and SARS, and can cause fever, breathing problems, pneumonia and kidney failure. The virus is thought to be primarily acquired through contact with camels, but it can also spread from human fluids and droplets.
There have been 1,167 cases of the virus worldwide and 479 of the patients have died, according to the European Center for Disease Prevention and Control. AP