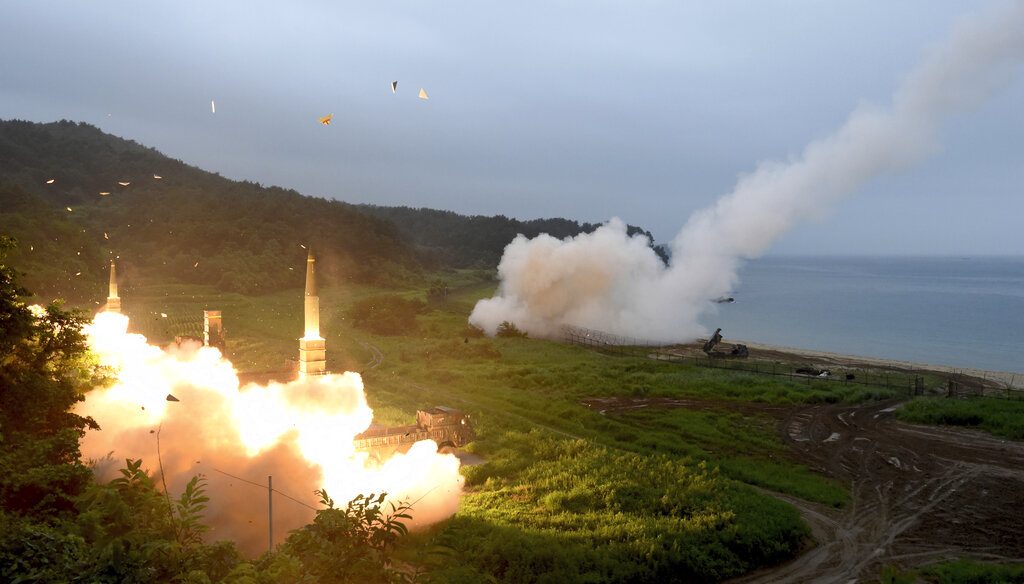 Seoul — South Korea said (today) Tuesday it has won U.S. consent to use solid fuel for space launch vehicles, a move that is expected to enable Seoul to launch its first surveillance satellites and acquire technology to build more powerful missiles.
Solid fuel offers greater mobility for missiles and rockets, and reduces launch preparation time. But Washington had imposed strict restrictions on Seoul’s use of solid propellant for space launch rockets out of concern that it could be used to produce bigger missiles and cause a regional arms race.
On Tuesday, the South Korean government said that Seoul and Washington have agreed to revise related bilateral missile guidelines to lift such restrictions.
Kim Hyun-chong, deputy presidential national security adviser, told reporters that all South Korean research institutes, companies and individuals are now free to develop, produce and possess space launch rockets using solid fuel.
Kim said the revised agreement still bars South Korea from having a missile with a range of more than 800 kilometers (500 miles). But he said Seoul can discuss altering that restriction with Washington if it’s needed for South Korean national security. A missile fired from South Korea with a maximum range of 800 kilometers is still enough to strike all of North Korea.
Kim said that South Korea’s intelligence and reconnaissance capability would be significantly improved when it produces and launches solid-fuel rockets to put low-earth orbit spy satellites into space. He said it makes more sense to use solid fuel rockets for such satellite launches because the price of solid propellant is only about one tenth of the price of liquid propellant.
“Theoretically, we can launch a low-earth orbit satellite via liquid-fuel rockets, but it’s like delivering a dish of ‘jjajangmyeon’ by a 10-ton truck,” he said, referring to a popular delivery food in South Korea.
Kim said South Korea has no military spy satellites while regional powers have dozens of them. He said the use of solid fuel rockets would help South Korea get an “unblinking eye” that monitors the Korean Peninsula around the clock.
Lee Choon Geun, a missile expert at South Korea’s Science and Technology Policy Institute, said South Korea could operate two or three low-earth orbit surveillance satellites to better monitor North Korea. He said solid propellants are easier to handle and require much less rocket launch times, though they have weaker thrust forces than high-quality liquid propellants.
Lee said the latest deals with the U.S. would also allow South Korea to expand its space development infrastructure and accumulate know-how to manufacture missiles that can fly longer with bigger warheads. Experts say ballistic missiles and rockets in satellite launches share similar bodies, engines and other technology.
Jung Changwook, head of the the private Korea Defense Study Forum, agreed that technology to produce solid-fuel rockets can also be used to build longer-range missiles. He said the United States likely agreed on the deals’ revision to strengthen its alliance with South Korea to better cope with China.
South Korea’s missile capability is inferior to that of rival North Korea. In 2017, North Korea carried out three intercontinental ballistic missiles tests as part of its efforts to build a nuclear-tipped missile capable of reaching the U.S. mainland. In 2013, South Korea succeeded in thrusting an observational satellite into orbit aboard a rocket blasted from its soil for the first time, but parts of that rocket were built with Russian help.