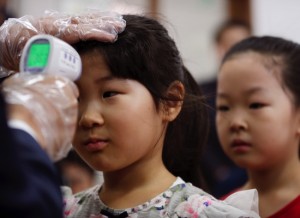 The World Health Organization says the spread of a mysterious virus from the Middle East to South Korea doesn’t merit being declared a global emergency despite infecting more than 160 people in the biggest outbreak outside the Arabian peninsula.
In a statement yesterday, the U.N. health agency called the epidemic “a wake-up call” and warned all countries to prepare for potential outbreaks of the Middle East respiratory syndrome, or MERS.
WHO acknowledged there were still fundamental gaps in its understanding of the disease nearly three years after MERS was first identified.
“We really don’t understand the situation very well,” said Dr. Keiji Fukuda, a WHO Assistant Director-General, noting it was unclear if the disease could be spread by people without symptoms or what environmental factors might speed transmission.
Fukuda said camels are the only known animal reservoir for the disease, although there could be others. He added there was no proof MERS had mutated into a more dangerous form in South Korea, where 20 people have now died.
Overall worldwide, 458 people have died from MERS since 2012.
WHO recommends that people avoid contact with camels, not drink camel milk or urine and only eat camel meat that has been well-cooked.
MERS appear to be spread among people in respiratory droplets such as by coughing, although infections have mostly occurred in those who had close contact with MERS patients. More than two dozen countries have reported cases, including the U.S., Britain, France and Germany.
Some experts lamented that little had changed in WHO’s ability to respond to outbreaks since last year’s devastating Ebola outbreak in West Africa which left more than 11,000 dead still hasn’t been contained.
“I don’t understand why they have not prioritized developing a camel vaccine to stop transmission from young camels to humans,” said Michael Osterholm, an infectious diseases expert at the University of Minnesota.
“If MERS shows up in the inner cities of one of the developing world megacities, like Lagos or Kinshasa, we will be in real trouble,” he said. “We know there will be future outbreaks if MERS isn’t stopped in the Middle East, but we are not very close to doing that now.” Maria Cheng, Medical Writer, London, AP