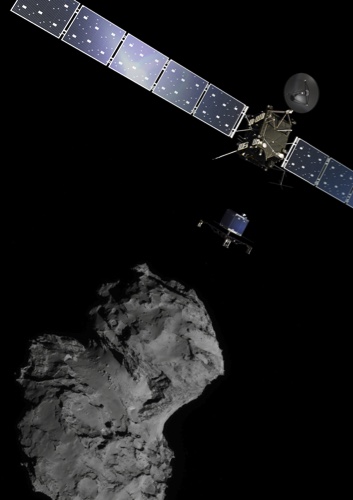 The European Space Agency’s unmanned Rosetta probe successfully released a lander toward the surface of comet 67P/Churyumov-Gerasimenko yesterday, putting it on its final seven-hour journey to a historic rendezvous with the fast-moving lump of dust and ice.
The audacious landing attempt is the climax of a decade-long mission to study the 4-kilometer wide comet, which is traveling at 66,000 kph. It is also the end of a 6.4 billion-kilometer journey on which Rosetta carried its sidekick lander Philae piggyback.
“It’s on its own now,” said Stephan Ulamec, Philae Lander Manager at the DLR German Aerospace Center. He said that “we’ll need some luck not to land on a boulder or a steep slope.”
If successful, it will be the first time that a spacecraft has landed on a comet.
ESA announced early yesterday that the 100-kilogram lander’s active descent system, which uses thrust to prevent the craft from bouncing off the comet’s surface, could not be activated. Instead, the agency is relying on ice screws and a harpoon system to secure the lander.
Hours later, mission controllers clapped and embraced as the lander’s separation was confirmed.
“Philae has gone — it’s on its path down to the comet,” Rosetta flight director Andrea Accomazzo said. “We are all glad that it worked flawlessly in the past minutes.”
About two hours after the separation was confirmed, scientists said they had re-established contact with the lander, as expected. “Now we can follow it on its descent,” said Paolo Ferri, head of mission operations at ESA.
The washing machine-sized lander is supposed to drift down to the comet and latch on using harpoons and screws. During the descent, scientists are powerless to do anything but watch, because the vast distance to Earth — 500 million kilometers  — makes it impossible to send instructions in real time. It takes more than 28 minutes for a command to reach Rosetta.
The plan is that Rosetta and Philae will then accompany the comet as it hurtles toward the sun and becomes increasingly active as it heats up. Using 21 different instruments, they will collect data that scientists hope will help explain the origins of comets and other celestial bodies.Frank Jordans and Christoph Noelting, Darmstadt , AP