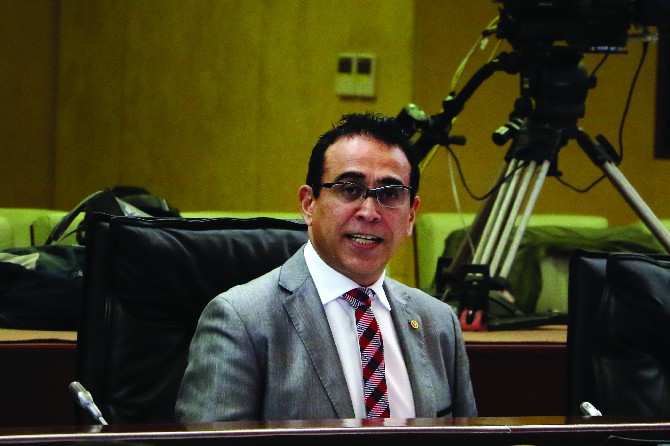 Two members of the First Standing Committee of the Legislative Assembly responded to José Maria Pereira Coutinho’s denunciation at yesterday’s session, at which Coutinho accused the committee of dragging its feet in failing to enact the long-overdue Consumer Protection Law.
Coutinho’s remarks came amidst a widely-publicizedpublicized consumer dispute, in which a closed yoga studio declined to return pre-paid tuition fees to customers. The total financial losses in the case are expected to reach MOP5 million.
“The comprehensive legal framework plays a preeminent role in safeguarding local consumer rights in conflicts like this case,” Coutinho stressed.
“However, the proposed Consumer Protection Law is still [going through] the ‘slow-cooked simmering’ process by the First Standing Committee and running far behind time for its introduction. How could the committee give local citizens an explanation [for the delay]?” he questioned.
Coutinho also urged the government to use the public fund to compensate the effected victims because of the legislative delay.
Following Coutinho’s blunt criticism, the chairman of the First Standing committee Ho Ion Sang rebutted Coutinho’s remarks, condemning his claims as “unfair” to all committee members, who have been toiling to implement the Consumer Protection Law.
So far, the Committee has convened as many as 16 meetings with the authorities to “repeatedly discuss the legislation,” Ho said.
“However, Coutinho has never attended any one of these meetings to help examine the draft bills. He has not made any contribution in such endeavor,” Ho added.
Ho revealed that the review process for the Consumer Right Protection Law is close to being wrapped up. The committee is now awaiting the final amendment document from the government.
Another member of the committee Ip Sio Kai also expressed his disagreement with Coutinho’s claims. He repudiated his remarks as “exaggerated, misinterpreted and groundless accusations.”
In response to the recriminations aimed at him, Coutinho clarified that he did not intend to point the finger at the committee. He just wanted to point out the fact that the government should finalize the long-overdue legislation process as soon as possible.
Following the heated exchanges, Kou Hoi In, president of the AL, interjected, remarking that Coutinho’s speeches were “accusatory,” and demanding that he consider revising his views.