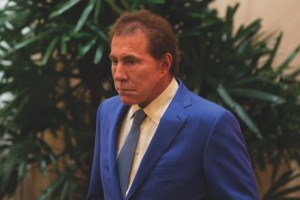 Fewer high rollers at Macau’s casinos means less money in Steve Wynn’s wallet. The founder and chief executive officer of Wynn Resorts Ltd. saw his compensation fall about 18 percent to USD20.7 million last year, according to a regulatory filing. The board cut his incentive payout as the company’s adjusted earnings before interest, taxes, depreciation and amortization plunged by a third.
Casino operators have been under pressure for two years as the Chinese government’s crackdown on corruption have made many high rollers wary of visiting the lavish venues in the Chinese gambling enclave. Wynn’s Macau property, which is mostly geared toward a high-end clientele and generates two thirds of the company’s revenue, has suffered accordingly, said Tim Craighead, director of research at Bloomberg Intelligence.
“The VIP business cratered and the mass market waned as visitation from China turned negative,” Craighead wrote in an e-mail.
The board cut Wynn’s annual incentive payout to $17.5 million, paid half in cash and half in shares, due to the company’s financial performance and the “competitive landscape of the labor market, according to the filing. Part of the incentive is tied to the development of Wynn Palace, a 1,700-room casino in the Cotai area of Macau expected to be completed in June, Wynn said during a Feb. 11 call with investors.
His salary was reduced to $2.5 million from $4 million so that a larger share of the pay package would be tied to the performance of the company, the proxy said.
Wynn, 74, has a net worth of $2.1 billion, according to the Bloomberg Billionaires Index. Sheldon Adelson, the billionaire founder and CEO of Las Vegas Sands Corp., received $12 million in reported compensation in 2014. James Murren of MGM Resorts International received $10.2 million.
Wynn’s press office didn’t immediately respond to an e-mail seeking comment.
Wynn’s new Macau venue has a gondola ride and a lake with fountains similar to the one fronting the Bellagio in Las Vegas, which could help the company gain traction among less affluent gamblers, Craighead said. Mass market gambling has slid since the Macau government enforced a smoking ban on main floors of casinos starting in October 2014.The company’s Las Vegas operations increased Ebitda by 15 percent to $127.4 million in 2015. The chief executive leases a villa from the Wynn Las Vegas casino, overlooking its adjacent golf course, for about about $560,000 per year, the proxy said. By Anders Melin and Alicia Ritcey, Bloomberg