Stilwell acknowledges lecturer’s dismissal was not about job performance 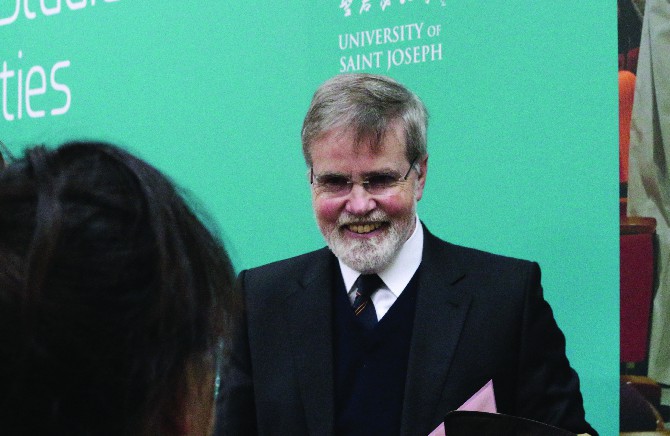 The former rector of the University of Saint Joseph, Peter Stilwell

The former rector of the University of Saint Joseph (USJ), Peter Stilwell, has said that the dismissal of former lecturer Eric Sautedé from the institution was not due to his professional performance, but instead due to a clash between Sautedé’s expression of political values in his capacity as a lecturer at the institution and the university’s principles of not interfering in political debate, TDM Radio reported.
The acknowledgment was made during a court hearing pertaining to the former lecturer’s case against the institution, in which Sautedé is seeking approximately 1.4 million patacas’ compensation in both moral and material damages resulting from the 2014 dismissal.
The court heard the former rector’s testimony on Monday, before the start of the trial, as Stilwell is planning to return to Portugal soon to enjoy his retirement.
The trial will discuss whether the conditions that led to Sautedé’s dismissal from the university can be considered discriminatory based on his political views and interventions in public society. If so, this will have contradicted the freedoms granted to Macau citizens, as provided by the Macau Basic Law.
At the hearing, Stilwell noted that a decision such as one ending a scholar’s employment at the institution must necessarily have a cause, explaining that the popularity of Sautedé among the media in Macau put the lecturer in a highlighted position, a fact that could work in favor of, or against, the institution, according to the positions conveyed.
“The more prominent a person is, the more careful they have to be with comments. […] You cannot make use of your importance in the institution, to make the scale move to one side or another,” he was quoted saying by TDM radio.
According to Stilwell, the situation presented in this case “is about recognizing how to position a Catholic university, which is an independent institution, in a space where political positioning has its nuances.” He added that it is not the role of a Catholic institution to enter into external political battles, citing the need to maintain neutrality.
In his testimony, the former rector identified several occasions on which the problem was not Sautedé’s opinions (as a citizen) but how the public expression of those opinions would reflect and create problems for the university, noting that Sautedé had been informed about it more than once and reminded of that fact.
During the session, Stilwell said, “Freedom of expression is guaranteed by societies and constitutions. It is not something that a university has the right to protect. What the university has to protect is academic freedom,” adding that the importance attributed by society to universities comes from their degree of autonomy from economic and political interests.
At the court, the former rector also stated his belief that the case of Sautedé had been highlighted due to the ongoing situation in the neighboring region of Hong Kong, where pro-democracy demonstrators have been vocal for years.