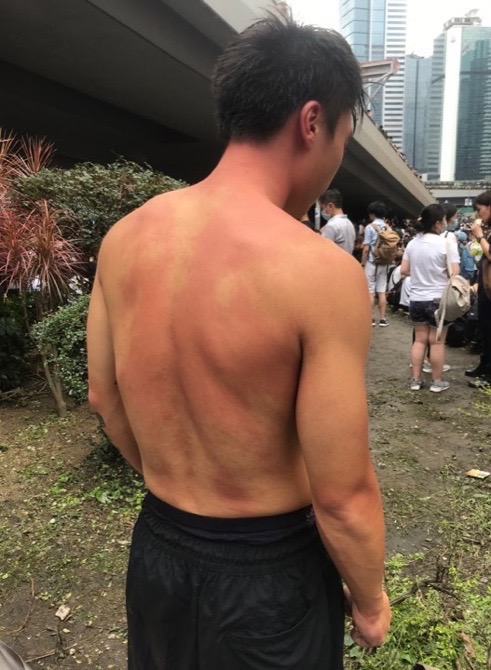 A local journalist from All About Macau said he was attacked by a Hong Kong police officer yesterday while interviewing demonstrators in the neighboring SAR.

The Macau journalist, surnamed Chan, posted news of the attack on his Facebook page. It was subsequently published by his employer.

Chan said that he was in the buffer zone between the police and the demonstrators. He was being assisted by several Hong Kong journalists and ambulance personnel in treating his injuries, which resulted from the pepper spray with which he was sprayed during his interview. While inside the buffer area getting treated for the injuries, Chan was not equipped with a helmet, mask, or glasses and Hong Kong police officers attacked his head, causing injuries to his back and arms.

According to Chan’s post, when he was attacked, he had a press badge on his body and he was holding a camera.

“I had my press badge and I was carrying a camera. However, the Hong Kong police authority still used pepper spray on me while I was receiving emergency treatment at the time. I engaged in no action whatsoever that could have had an effect on the police officers or demonstrators. I was not even able to take any action at all, and I was still sprayed by the police,” Chan wrote.

After Chan was attacked in the buffer area he escaped to the demonstration area, where demonstrators treated him.

Chan expressed his belief that he was fortunate, as his eyes were not injured. However, he noted that his other injuries will require him to rest for a few days.

Chan went to Hong Kong late on Tuesday night. He was interviewing the demonstrators overnight in Admiralty.

Several Macau local shops, including Little Nomad, Júbilo 31 Books, and Something Moon, have responded to Hong Kong’s ongoing “No China Extradition” movement, according to a report by Macau Concealers.

One of the shops owners, surnamed Lei, believes that Hong Kong and Macau are united under the ‘One Country and Two Systems’ policy, and that Macau people should stand up and support Hong Kong out of shared responsibility and morality.

In Lei’s opinion, the fugitive bill is closely related to the interest of Macau people. She worries that once the bill is passed in Hong Kong, Macau will follow in the same steps to establish such a bill.

Another local resident, surnamed Lam, also participated in the demonstration in Hong Kong yesterday. “The mainland’s judicial system itself is not well-established, and they do not even obey that imperfect system,” Lam told Macau Concealers.

Another Macau local, surnamed Chan, visited Hong Kong to get a sense of the atmosphere of the demonstration.

“There is not this chance [to protest] in Macau. I will not feel like an outsider in Hong Kong because everybody is going out to the streets. In Macau, if you demonstrate, the police officers will have a one-on-one look at you,” said Chan.

By the entrance of his restaurant, Kelvin Chung hung a piece of paper announcing the restaurant’s intention to strike yesterday.

“Hoping to find a breath of freedom,” the sign said, adding that the shop would offer free honey green tea at lunch time to boost the city’s morale.

His modest Japanese-style grill joined other small businesses that closed their doors to show solidarity with thousands of protesters who blocked government buildings in central Hong Kong, forcing the Legislative Council to postpone debate on highly contentious changes to the territory’s extradition’s laws.

Chung said the legislation is unlikely to have an impact on his restaurant, Delicorner, which offers fried chicken and grilled eel paired with tea. But the 30-year-old said he felt obliged to strike because he cared about the future of Hong Kong.

“The kind of democracy that we long for should be fearless,” Chung said.

The proposed amendments would allow people in Hong Kong to be sent to mainland China to face trial.

Opponents say that would subject people to the mainland’s murky judicial system, which has been accused of bringing vague charges against critics of Communist Party rule and holding unfair trials. Many in Hong Kong worry that the changes would erode the semi-autonomous region’s rule of law and legal independence.

Chung said his goal is to become a psychological counselor, and he is worried that the extradition bill would prevent him from speaking freely to his clients.

“Maybe the law originally had a good objective,” he said, “but the main worry is that mainland China’s legal system is not trustworthy.”

Hong Kong students sitting outside the consulate in Taipei held posters reading “No extradition to China” and chanting “Hong Kong government, Shame on you.”

Ho Wing Tung, a Hong Kong student in Taiwan, said the rule of law won’t exist if the legislation passes and she is afraid the “one country, two systems” principle would become a joke. 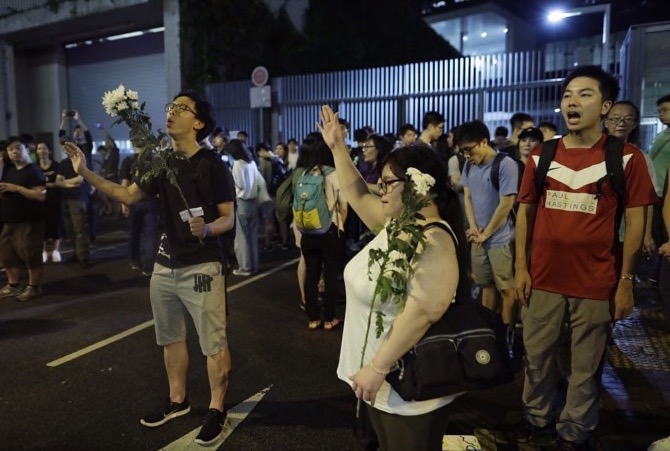 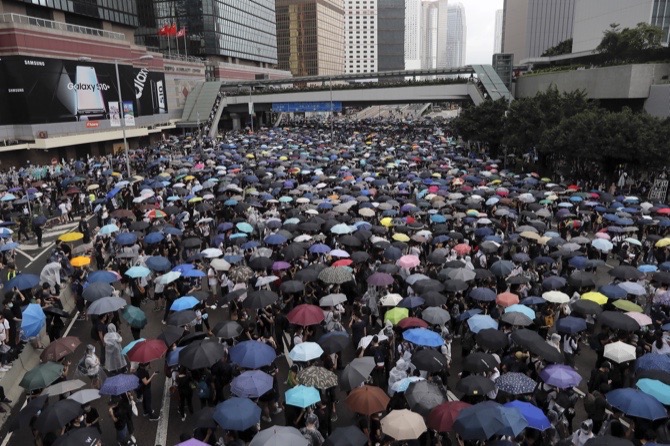