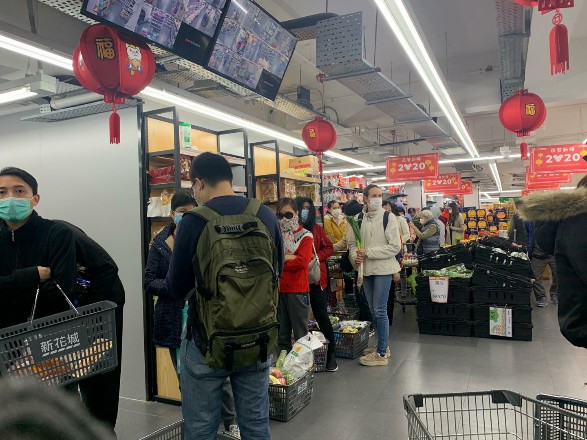 The appeals of Chief Executive Ho Iat Seng and later Secretary for Economy and Finance, Lei Wai Nong, were ignored by a large number of residents who rushed to the markets and supermarkets of the region to stock up on food products yesterday.
The government has guaranteed that there was no shortage in the supply of food products of any kind to Macau and that the supply was guaranteed to hold stable in the near future.
Nevertheless, people rushed to the markets and supermarkets across the SAR yesterday to stock themselves and their families in the event of any possible shortage.
Rice, oil, noodles, vegetables, fruits and canned food were among the most wanted with people, in some cases, stocking more than they could even carry in their hands.
According to people heard by the Times, the rush was more evident yesterday afternoon after the announcement of the two-week closure of casinos and suspension of most public services.
However, in some areas of the city such as the Areia Preta district, there were reports of empty shelves in supermarkets starting in the early morning.
The situation was aggravated during the afternoon and early evening when long queues started to form at supermarkets and aisles were becoming emptied.
By 5 p.m. most of the fresh produce at one supermarket in central Macau was depleted and people queuing for the cashier were busy on their phones trying to understand the stock levels in other nearby stores.
Images shared on social media showed people stocking large quantities of groceries and other products. In at least one post, vehicles were seen heavily loaded with boxes of fruits and vegetables.
Contacted by the Times, the general manager of one supermarket admitted that the rush was apparent yesterday but affirmed – as the Chief Executive had also insisted – that there is no shortage of food products in Macau and that supply chain is stable.
During the daily press conference organized by the government, Secretary Lei repeated the appeal of the Chief Executive not to rush to the supermarket and stock personal supplies. Lei noted that the rush to buy an exaggerated quantity of products can harm the normal operation of the markets.
However, many residents seemed to ignore the government’s suggestions, preferring to take the matter of supplies for the coming two weeks into their own hands.