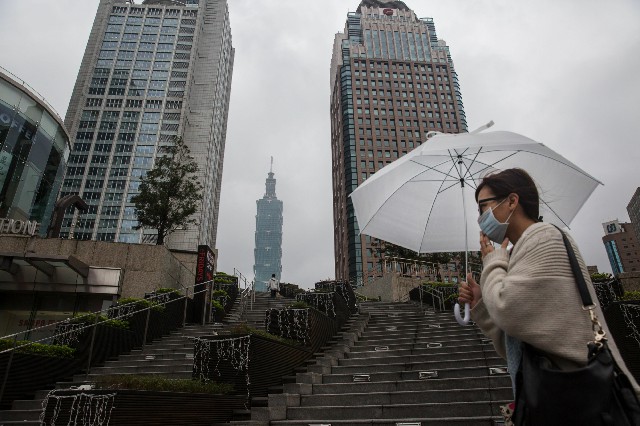 Taiwan’s push for its companies to invest in advanced manufacturing at home after decades of focusing on China is helping off-set the effects of Beijing’s trade war with the U.S., the government said.
Taiwanese companies have pledged to invest almost NT$1.2 trillion ($39 billion) at home since the government initiated a program at the beginning of the year to attract investment from local companies with facilities in China.
“We will see additional annual investments of NT$300 to NT$400 billion a year over the next two to three years thanks to the return of Taiwanese companies,” Minister without Portfolio Kung Ming-hsin told Bloomberg News last Thursday. “We are confident that we will see solid growth momentum for the next three to four years.”
The plan to lure local companies to invest back home is one of two competing economic visions for Taiwan as voters weigh their choices ahead of the Jan. 11 presidential election. While incumbent President Tsai Ing-wen is pinning Taiwan’s economic future on developing industries such as advanced manufacturing, clean energy and defense domestically, her opponent, Han Kuo-yu of the opposition Kuomintang, advocates further removing barriers to doing business with China.

Shifting Production
Taiwanese companies like Hon Hai Precision Industry, which makes gadgets for many of the top global electronics brands, began investing in China in the late 1980s, kicking off a transformation that’s made China the world’s factory floor. But faced with ongoing trade tensions and tariffs between Taiwan’s two biggest overseas markets, the leaders of those companies are increasingly shifting production to Taiwan and Southeast Asia to protect their wafer-thin margins.
The government announced a record NT$70.1 billion investment in Taiwan by Hon Hai’s panel-making affiliate Innolux Corp. last week.
Taiwanese companies have moved facilities producing high-end networking gear, laptops, servers and bicycles back to Taiwan this year, while manufacturing of lower-margin products has gone to Southeast Asia, Kung said. The minister identified smart manufacturing and connected devices as new areas Taiwanese companies could compete in.
Despite the trade war taking a toll on growth in Asia’s export-dependent countries, Taiwan is on track for GDP to rise 2.5% this year. The island’s shipments to the U.S. rose almost $4.2 billion in the first half of 2019, gaining from China’s loss of exports to America, a recent United Nations Conference on Trade and Development report noted.
Kung said that the government is readying land in southern Taiwan homecoming companies can begin moving into starting from 2021. Taiwanese officials are also working to expand an existing science park in southern Taiwanese city of Tainan and creating a brand new one in the neighboring Kaohsiung city, Kung said.
“We will only have three to four years to reshape our industries, and the outcome will decide our future for the next decade or two,” Kung said. “We are planning to turn Taiwan into an advanced manufacturing center because companies now are moving production of their premium products home.” Debby Wu & Miaojung Lin, Bloomberg