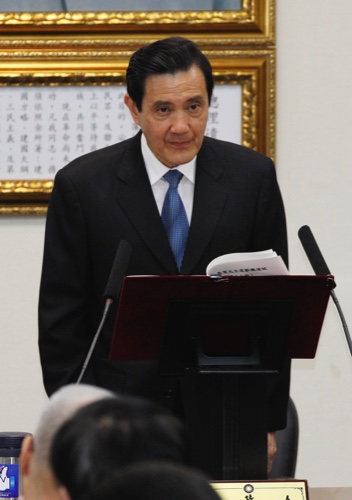 Taiwan’s President Ma Ying-jeou resigned yesterday as chairman of the Beijing-friendly ruling Nationalists after surprisingly harsh local election losses, a signal the party plans to regroup for a tough 2016 presidential race and may shelve dialogue with China.
Ma tendered his resignation at a meeting of the party’s Central Standing Committee, which was expected to pick Taiwan Vice President Wu Den-yih as interim chair. Ma will remain Taiwan’s president until 2016, when he must leave office after eight years due to term limits.
“These election results remind us to grasp strength and listen with humility,” Ma said, bowing for 10 seconds in apology as he resigned.
“I want to apologize to all of our supporters. I am ashamed. I have disappointed everyone. I must deeply, personally examine myself. There is no shirking of acceptance of the highest responsibility for the election losses.”
The Nationalists, also known as the KMT, lost nine seats Saturday, including their stronghold, the capital city Taipei, after opinion polls had forecast they would drop just three.
Their chief rival, the Democratic Progressive Party, won seven and independents took two. The pro-independence DPP wants dialogue with China but rejects Beijing’s demand that it acknowledge the two sides are a single country.
Taiwan and China split amid civil war in 1949 and Beijing is determined to assert control over the island by force if need be.
Concerns over increasingly close trade links with Beijing were considered a significant factor in the party’s defeat.
Ma now has even less influence over the party’s often contrarian legislators, who fear a public backlash against the proposed China deals that were stymied by student protesters in March would further dim the Nationalists’ hopes in 2016.
In coming days, Ma is expected to appoint a new premier and ministers following the Cabinet’s resignation after the election.

China called on Taiwan yesterday to stay the course of deepening exchanges between the sides following a stunning electoral defeat for the island’s ruling pro-China Nationalist Party. The statement posted to the website of the Cabinet’s Taiwan Affairs Office followed Taiwanese President Ma Ying-jeou’s announcement that he is stepping down as party chairman to take responsibility for the loss of nine city and county elections over the weekend. The election results reflected concerns over Ma’s moves to integrate Taiwan’s economy with China’s, seen by many as a step toward Beijing’s goal of gaining political control over the island. Greater interaction between the sides has brought “tangible benefits” to both, Taiwan Affairs Office spokesman Fan Liqing was quoted as saying in the statement. “We hope that … exchanges and cooperation in all fields will continue to deepen and the people development of relations between the two sides will continue to advance,” Fan said. Ralph Jennings, Taipei ,AP