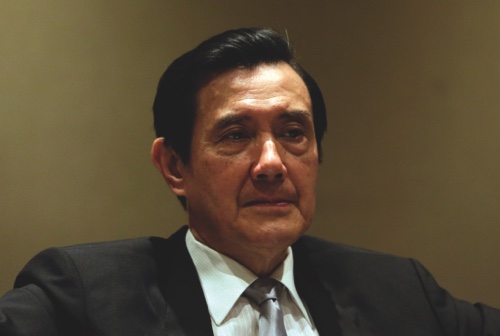 Taiwan’s ruling Nationalist Party said yesterday that President Ma Ying-jeou would step down as party chairman following stiff defeats in local elections over the weekend that cast a shadow over his pro-China policies.
A statement issued by the Nationalists in Ma’s name said he holds himself responsible for the defeat and feels it is time to pass the torch after nine years as chairman.
“Over the last 120 years, the Nationalist Party has encountered countless failures, but has never been categorically defeated and each time we pick ourselves back up again,” Ma said.
He said he would formally tender his resignation at today’s meeting of the party’s Central Standing Committee. Ma is halfway through his second and final four-year term as president.
In Saturday’s polls, the Nationalists lost nine city and county elections, including in longtime strongholds Taipei, the capital, and the major central city of Taichung. The main opposition Democratic Progressive Party picked up seven of those seats, with independents winning two others.
The results showed widespread anxiety about Ma’s moves to integrate Taiwan’s economy with China’s, seen by many as a further step toward Beijing’s goal of eventual political unification between the sides. China claims Taiwan as part of its territory and has vowed to take control of the island by force if necessary.
Young Taiwanese blame competition from China for suppressing wages, and there is little enthusiasm here for merging the island’s vibrant democracy with Beijing’s authoritarian one-party system.
Niu Jun, a Taiwan expert at China’s Peking University, said the trend of closer economic ties across the Taiwan Strait probably is irreversible. But he said the election results reveal the discontent among young voters and those in basic industries over their failure to share in the fruits of Ma’s policy of strengthening ties with China.
“So it is a question whether the benefits of the cross-Strait relations have been shared by the whole society, and Ma failed to take enough notice of that,” Niu said.
The electoral battering puts the Nationalist Party on the defensive ahead of the 2016 presidential election. Two potential Nationalist candidates to succeed Ma as president — Vice President Wu Den-yih and outgoing Taipei Mayor Hau Lung-bin — resigned their party vice chairman posts following the election defeats.
Since 2008, Taiwan and China have signed 21 trade, transit and investment agreements, but protesters in March occupied parliament in Taipei to stop ratification of a China trade liberalization deal.
Following the weekend elections, Premier Jiang Yi-huah and his Cabinet members tendered their formal resignations but remained on as a caretaker government.
The Nationalists should take Ma’s resignation as an opportunity to inject fresh blood and new thinking into the party, said Alexander Huang, a strategic studies professor at Taiwan’s Tamkang University.
“They need to get more energetic people, the younger generation who understands the 21st century better,” Huang said.
Having lost his authority over Nationalist lawmakers, Ma could find it harder to convince them to support his pro-China policies such as the stalled trade deal, said Lai I-chung, vice president of Taiwan Think Tank.
“Controversial deals in the legislature won’t be able to see the light of day,” he said.  AP