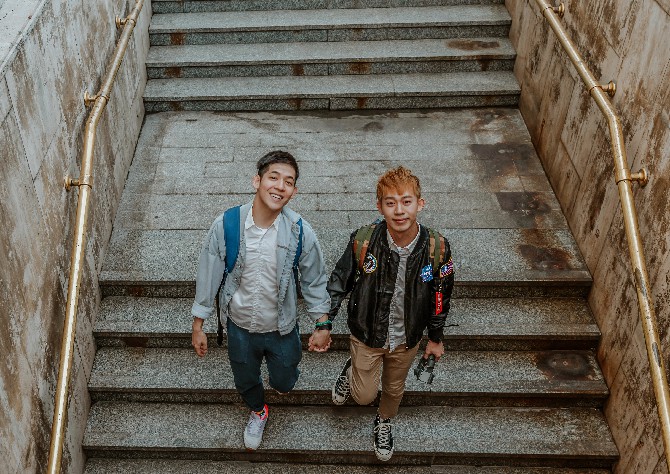 News of the legal marriage of Taiwanese man Ting Tse-yan and Macau’s Guzifer Leong in Taiwan late last week has sparked joy and feelings of hope locally, local LGBT rights association Rainbow of Macau told the Times.
After a lengthy process, and two years after Taipei’s Zhongzheng District Household Registration Office rejected their first application, the same-sex couple were finally able to legally register their marriage in an unprecedented court victory.
According to Rainbow of Macau, the couple’s marriage is the first of its kind in Taiwan involving an inter-jurisdictional relationship.
“Their case is an exceptionally distinguishing example both domestically and globally, [because under] Taiwanese marriage law, the side of a same-sex couple who is non-Taiwanese must be from a jurisdiction that recognizes same-sex marriage for the procedure to [be permitted] in Taiwan,” the local non-governmental organization said, adding, “in Guzifer’s case, he is from Macau where same-sex marriage is neither recognized nor registered, so getting married in Taiwan was barely possible.”
The same-sex marriage was only possible since a ruling in May this year from Taipei’s High Administrative Court, which considered that “the legal jurisdiction for civil matters must be based on a person’s place of habitual residence.” Taking into account the fact that Leong had moved to and had been residing in Taiwan since 2017, it was not necessary to consult the laws and regulations on the matter in Macau. Only the Taiwanese laws and regulations required consideration.
Rainbow of Macau also noted that the breakthrough achieved by the couple is particularly important as it constitutes jurisprudence that might help to resolve many other similar cases that are currently stalled.
“This will encourage people in Taiwan in similar situations to file a judicial appeal,” Rainbow of Macau said.

No steps forward in Macau
Questioned on the topic, the local organization said that no progress has been seen so far in Macau in the area of same-sex marriage.
Although the issue has been raised at times over the last few years, including at the Legislative Assembly, Rainbow of Macau thinks that the lack of progress on the topic is related to the lack of understanding about how a legal bond can make a real difference.
“There is not enough dialogue on the issue and even the local gay community does not show enough interest in the matter,” a Rainbow of Macau representative told the Times, adding, “they cannot visualize that a legal marriage can make a difference in many situations, such as on an application for economic housing. If you apply as a single person, your chances of getting economic housing are very slim, but if you apply as a married couple there [is a higher] chance.”
For the NGO, marriage is both a right and an option. “Each individual has the freedom to determine if they want to get married but, in terms of rights, they should be able to when they desire to,” the representative said.
A legal registration of marriage is also highly relevant when granting the power to decide on behalf of one’s partner, such as when providing emergency medical consent or in other situations.