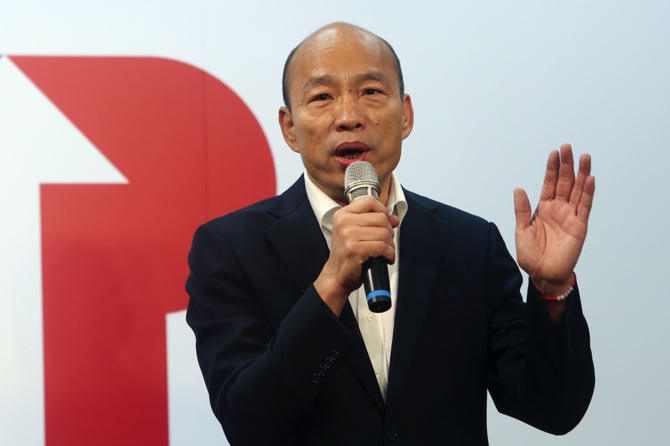 Han Kuo-yu of the Nationalist Party told reporters yesterday that Taiwan stood as an example of how it was possible to transition to full democracy without major changes to national identity.

The “political crux” of the situation in Hong Kong is that “the people question the legitimacy of their leaders. They think that they’re not sufficiently representative,” Han said.

That could be easily fixed by allowing direct elections for chief executive and members of the local legislature, he said, despite Beijing’s firm objections.

Han’s remarks are not greatly different from those of his opponent in the Jan. 11 election, incumbent President Tsai Ing-wen, whom Beijing has sought to isolate politically over her refusal to agree that Taiwan is part of China. Beijing regularly lashes out at her government’s calls for reform in Hong Kong and dialogue with political opponents.

Han, in contrast, has endorsed a 1992 agreement with Beijing that says Taiwan is part of China, while maintaining its own interpretation of what that means.

That, he said, is the “best foundation” for interaction between the sides. He urged Tsai to also adopt the agreement out of purely practical considerations.

Speaking at a gathering with foreign reporters in Taiwan’s capital, Taipei, Han, 62, did not directly answer when asked whether his concept of “one China” was the same as that of Chinese President and leader of the ruling Communist Party Xi Jinping, who says Taiwan must inevitably come under Beijing’s control, by force if necessary.

A former legislator, Han was elected mayor of Kaohsiung in December 2018. Shortly after that, he traveled to China to sign deals to sell 5.2 billion New Taiwan dollars ($165 million) worth of Taiwanese agricultural products.

He also met with leading officials for relations with Taiwan, including the head of the Cabinet’s Taiwan Affairs Office, Liu Jieyi, and ranking Communist Party officials in Hong Kong.

That reinforced the view in the minds of some voters that Beijing was strongly backing Han’s candidacy, largely seen as a negative in Taiwan, where antipathy toward the Communist government runs strong.

However, Han said he doesn’t accept the label that he is Beijing’s preferred candidate, pointing out that officials from the ruling Democratic Progressive Party have also had interactions with Chinese officials.

Han is seen as a maverick, pro-China populist with a brash, combative style.

The son of immigrants from the central Chinese province of Henan, Han is seen as the standard bearer for the roughly 10% of Taiwanese who fled China with Chiang Kai-shek’s Nationalists in 1949, along with their descendants.

Han has attracted controversy by overseeing a purge of Nationalist Party lawmakers seen as insufficiently loyal and by labeling television pundits as corrupt. Questions have also been raised about the source of his personal wealth and his tendency to deny having said things, despite video evidence to the contrary.

After an initial burst of voter enthusiasm, Han’s poll numbers have plunged and he has lagged well behind Tsai in most recent surveys. He said he wasn’t “the least bit worried,” however, describing polls as “cold” in contrast to the warmth he experiences from voters.

Ultimately, the election will be a referendum on Tsai’s performance over the past four years, Han said. He has attacked her both over the impasse with China and with Taiwan’s continuing sluggish economic growth and stagnating wages.

“If the 23 million people of Taiwan are not feeling happy, or even feeling distressed and anxious, then please vote for Han Kuo-yu,” he said. Taijing Wu, Taipei, AP