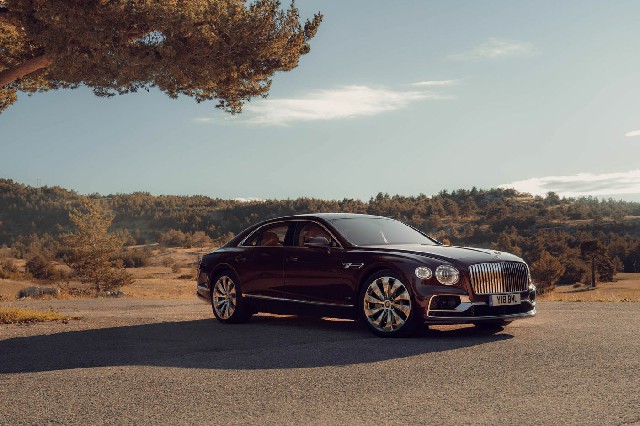 If you’re like me, you don’t quite know what an actual “flying spur” is.
Of course, we know the car. Bentley will be delivering the third generation of its $214,600 Flying Spur sedan early next year.
But as I lounged recently in the back of a 2020 Bentley Flying Spur gliding down the old road running from Nice to Monte Carlo, I found myself wondering from whence comes that odd moniker. The courtly French-speaking driver operating the car, sitting about two meters in front of me, was no help, nor was the glimmering Mediterranean, in all its ancient wisdom.
Is it some cowboy emblem from the American West? A rare type of mid-Asian warbler?
Turns out, it’s Scottish. The name first appeared in 1957, bequeathed on a saloon known officially as the Bentley S1 Continental Flying Spur. Bentley’s design director at the time was Arthur Talbot Johnstone, of the clan Johnstone of the Scottish Borders, whose family crest featured an iron riding spur, suspended midair. So, fittingly, the front grill of Johnstone’s vehicular Flying Spur boasted one on its grille, flying through space while the car surged forward.
The automobile has since cut quite the memorable figure.
Bentley has reevaluated its iconic marque from the ground up this year, a risky proposal for a large, expensive, long-running sedan that, if mishandled, could grow bloated and obtuse and, with a massive 12-cylinder engine, appear woefully out of touch.
Thank goodness for British restraint. The company, currently celebrating its centenary, adjusted the little things on the car with deft attention and articulated the bigger things with masterful skill.
The result is that now, more than ever, those who need the legroom of a private jet, the silence of a library, and the type of stealthy prestige a Rolls-Royce is unlikely to offer, will find that the Flying Spur presents a joyful prospect.

First, the details
Here are the little things that pinpoint Bentley’s design genius:
1. The hood ornament has been redesigned, flattened on the top and bottom to form a more lethal-looking flying B—a right proper arrow. The wings themselves are now sculpture-level etched glass, and they illuminate at night like a glowing Rodin; the whole thing drops out of sight, or reemerges, at the push of a button inside the cabin, or as part of the welcome sequence in the keyless entry system as the driver approaches the car. I loved how it looked, and I loved how it worked.
2. The new LED crystal-cut headlights, which are sliced like the perfect heavy bourbon crystal glass they use at the swankest of hotel bars (the $4,735 Blackline Specification package rims them in black, like the perfect kohl-lined smoky eye).
3. The diamond knurling details throughout the interior of the cabin, including on the new angular vents for heating and cooling, which replace the traditional round bulls-eye vents we saw in last year’s Flying Spur. That minor detail took a year to refine, according to Bentley product line director Peter Guest, requiring a new software algorithm to cut the 5,331 individual diamond shapes into the surface of the central vent panel alone.
4. There are three USB ports distributed within the car, three more than in the previous generation, which was quite a hardship for those of us who might want to drive the car on an actual road trip. Other things I discovered, to my delight, during my stint in the back seat included: suede headrest pillows; a tiny refrigerator with room to hold four small bottles of … er, water; retractable interior window shades; heating and cooling seats, plus five massage modes. (The modes were written in French in the car I tested, so I have to guess from how they felt that they spanned from shiatsu to Swedish.) I controlled those massage modes, the shades, the 2,200-watt Naim surround-sound system, and the lighting from a handheld remote that docked in the center of the rear console. I also took a few selfies using the photo function of the 5-inch TV screens implanted in the back of the front seat headrests.
5. The proportions of the car are subtly more muscular than last year’s model, especially at the rear, highlighted by the new wraparound rear lamps incorporating B motifs on each side (the car is more than 87 inches wide, 9 more than Flying Spur gen-two).
6. The 22-inch machined alloy wheels, which command subservience from everything else in the parking lot, even when that lot is in front of the Casino de Monte Carlo.
All those little things add up to offer greater enjoyment than the sum of their parts.
And here is one big thing: That grille. It’s an all-new radiator matrix, gloss black with bright chrome and vertical vanes, just like on the original. While the rest of the car, especially in one of the darker of the 30 exterior colors available for the exterior, can feel reserved, even quiet, the imposing grin now added to the front makes it unmistakable from any distance. 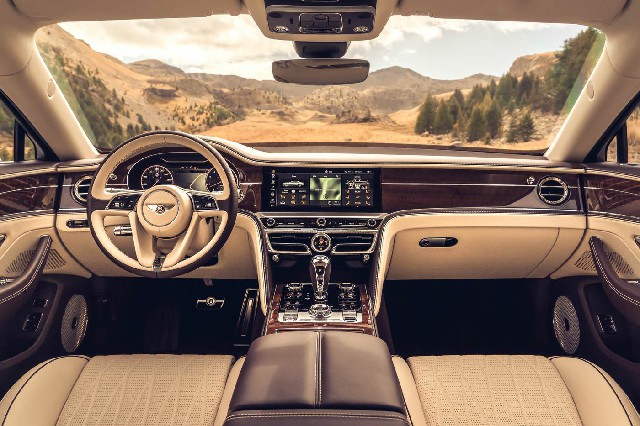 Nitpicker paradise
I have a few quibbles with the 2020 Spur, some of which may be counter to its innate being, so feel free to pick your way through these as you see fit:
The A pillar that supports the front of the car is so wide it blocked my sight lines occasionally as the car dipped around corners and down bends as I foxtrotted through the Pyrenees;
The dock for the handheld remote mounted on the back of the front center console proved painfully placed, as I often hit the back of my elbow on it while resting my arm on said console;
The entertainment screens in the rear of the car look rather tacked onto the front seat headrests, rather than integrated in some ingenious elegant way befitting a costly sedan;
And one TBD for those inquiring minds who will want to know: At the time of this writing, Bentley had not released EPA ratings for the level of efficiency we can expect from the Flying Spur; however, the car is said to be roughly 15% more efficient than its predecessor, with a 6-cylinder variable displacement function that kicks in when top power isn’t needed and with overdrive, where top speed is reached in 6th gear, so the 7th- and 8th-gears are used for maximum efficiency when cruising at high speeds.

Leonine power
In fact, for all its back-seat pleasures, not to mention its 209-inch length and 6,614-pound hulk, the Flying Spur can keep pace with the exceptional Continental GT in nearly every criteria worth mentioning.
It packs the same 6.0-liter twin-turbocharged W12 engine as the GT, with a dual-clutch eight-speed transmission and the biggest iron brakes in the world. The car is more than 5 inches longer than its predecessor, additions that did nothing to help as I picked my way down mountain passes like an overfed billy goat (area residents honked in displeasure). But Bentley deserves high praise for the fact that even though this car is bigger than last year’s, it managed to lose 83 pounds and, with Bentley’s first-ever all-wheel-steering apparatus and its standard all-wheel-drive, carries itself with remarkable elegance and ease.
The torque alone will move you to joyful tears, if it doesn’t scare you first with its thrust: 354 pound-feet of force that made the car’s 0-60 mph sprint of 3.7 seconds feel about a second faster. Top speed is 207 mph. Not that I got close to that on Southern France’s windy roads. But even from the back seat, the natural power position inside this grand sedan, it certainly makes one feel smug to know it’s there. A small detail.  Hannah Elliott, Bloomberg