This day in history | 1950 India becomes a republic 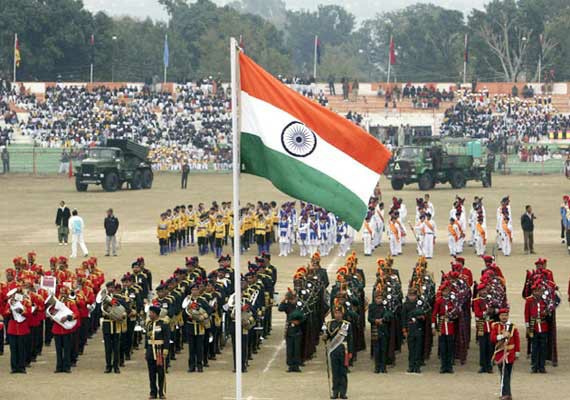 The independent republic of India is officially born today, after nearly 100 years of British rule.
A public holiday has been declared throughout the country, and millions of people have been celebrating with processions and ceremonies to hoist the new flag of India for the first time.
India has been running her own affairs since the actual transfer of power from British to Indian hands on 15 August 1947.
But today’s ceremonies mark the cutting of her last ties to Britain. India’s first president has been sworn in, replacing the King as the country’s head of state, and the new constitution ratified.
In the capital, Delhi, the day began with the 34th and last Governor-General of India, Chakravarti Rajagopalachari, reading out a proclamation announcing the birth of the Republic of India.
The new President, Dr Rajendra Prasad, then took the oath of office.
Dr Prasad was a key campaigner in the nationalist movement of Mahatma Gandhi, along with India’s interim Prime Minister, Pandit Jawaharlal Nehru.
The president then addressed the crowd first in Hindi, and then in English.
“Today, for the first time in our long and chequered history,” he said, “we find the whole of this vast land… brought together under the jurisdiction of one constitution and one union which takes over responsibility for the welfare of more than 320 million men and women who inhabit it.”
Dr Prasad then drove through the streets in his state coach, greeted by thousands of people along the way.
The crowds were jubilant, but restrained – a marked change from the highly-charged atmosphere of August 15 1947, when the British finally left India.
Then, there were scenes of total chaos as the police struggled to control the crowd, and riots broke out across the city.
Over the next two years, hundreds of thousands died in the terrible violence that followed partition – the division of the British colony into two nations, the secular but Hindu-dominated India and the Islamic Republic of Pakistan.
Then in 1948 the man who steered India to independence, Mahatma Gandhi, was assassinated.
Today, the place where he was cremated on the banks of the River Jumna became a site of pilgrimage for thousands of people.
Dr Prasad visited the spot soon after daybreak and joined in paying homage to the memory of the man now known as “the father of the nation”.

Dr Rajendra Prasad served for 12 years as India’s president, retiring in 1962. He died in February 1963.
Jawaharlal Nehru became India’s first elected prime minister in the first general election in 1952.
He governed the country until his death in 1964, and remains a towering figure in India’s early political history.
He broke new ground by following a non-aligned policy, steering a difficult course between the two main power blocs of the communist East and capitalist West during some of the most difficult years of the Cold War.
He dreamed of a socialist society, and created a vast public infrastructure.
He also ran a virtually closed economy, a policy which was strongly criticised in later years.
In the 1980s and 1990s, India began to open up to the outside world, encouraging economic reform and foreign investment.