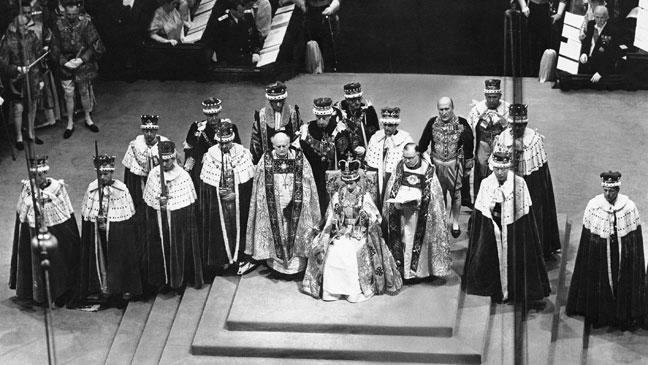 Queen Elizabeth II has been crowned at a coronation ceremony in Westminster Abbey in London.
In front of more than 8,000 guests, including prime ministers and heads of state from around the Commonwealth, she took the Coronation Oath and is now bound to serve her people and to maintain the laws of God.
After being handed the four symbols of authority – the orb, the sceptre, the rod of mercy and the royal ring of sapphire and rubies – the Archbishop of Canterbury, Dr Geoffrey Fisher, placed St Edward’s Crown on her head to complete the ceremony.
A shout of “God Save the Queen” was heard and gun salutes were fired as crowds cheered.
The Archbishop and fellow bishops then paid homage to Queen Elizabeth II.
In a radio broadcast the Queen said: “Throughout all my life and with all my heart I shall strive to be worthy of your trust”.
An estimated three million people lined the streets of London to catch a glimpse of the new monarch as she made her way to and from Buckingham Palace in the golden state coach.
The ceremony was watched by millions more around the world as the BBC set up their biggest ever outside broadcast to provide live coverage of the event on radio and television. Street parties were held throughout the UK as people crowded round television sets to watch the ceremony.
The crowds, some of whom had camped out overnight to ensure a prime position, were rewarded when the Queen and other members of her family, including the Queen Mother, appeared on the balcony at Buckingham Palace.
Despite the overcast weather conditions the RAF marked the occasion with a fly past down the Mall.
A fireworks display then lit up the skies above Victoria Embankment.
The Queen replaced her father, King George VI, as monarch following his death on 6 February 1952. After 16 years on the throne he passed away in his sleep and his 25-year-old daughter Elizabeth immediately became Queen.
The princess formally proclaimed herself Queen and Head of the Commonwealth and Defender of the Faith in February 1952 but the amount of planning and a wish for a sunny day for the occasion led to the long but excited wait for this day.

Over 20 million people watched the BBC coverage of the coronation. Many people crowded round neighbours’ sets to watch television for the first time. The broadcast was made in 44 languages. <br>
There was a shortage of professional coachmen to help transport dignitaries to Westminster Abbey in horse drawn carriages. Millionaire businessmen and country squires offered their services and on the day they dressed up as Buckingham Palace servants and helped take people to the ceremony.
Many commemorative souvenirs were produced to mark the occasion including a special set of four postage stamps. <br>
In 2002 the Queen celebrated her Golden Jubilee. She marked her 50 years on the throne with a mammoth tour of the Commonwealth and UK where millions turned out to celebrate during the Jubilee weekend. <br>
The highlight of the weekend was the ‘Party at the Palace’ where stars from Ozzy Osbourne and Sir Paul McCartney to S Club 7 and Blue joined forces to entertain the crowds at Buckingham Palace.