This day in history | 1963 Kennedy shot dead in Dallas 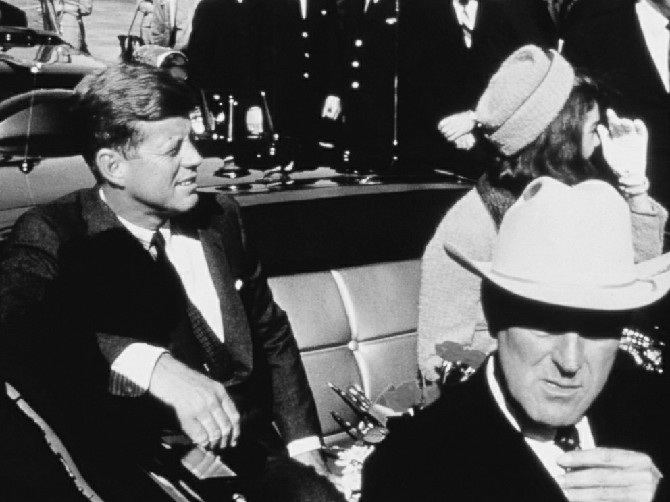 The President of the United States has been assassinated by a gunman in Dallas, Texas.
John F Kennedy was hit in the head and throat when three shots were fired at his open-topped car.
The presidential motorcade was travelling through the main business area of the city.
Texas Governor John Connally was also seriously injured when one of the unknown sniper’s bullets hit him in the back.
The men were accompanied by their wives, who were both uninjured.
Vice-president Lyndon Johnson – who was following in a different car – has been sworn in as the new US leader.
The presidential party was driving from Dallas airport to the city centre when witnesses said shots were fired from the window of a building overlooking the road.
The president collapsed into Jackie Kennedy’s arms, who was heard to cry “Oh no”. Seconds later Governor Connally was also hit.
Dallas Times Herald photographer Bob Jackson was in the motorcade close behind the Democrat leader’s car and heard the shots as it entered Dealey Plaza.
“As I looked up I saw a rifle being pulled back from a window – it might have been resting on the windowsill – I didn’t see a man,” he said.
Mr Kennedy’s limousine was driven at speed to Parklands Hospital immediately after the shooting.
The president was alive when he was admitted, but died at 1400 local time (1900 GMT) – 35 minutes after being shot.
Police and Secret Service agents stormed the School Book Depository building moments after the shots were fired and recovered a rifle with a telescopic sight, said to be the assassination weapon.
The mood of shock in the US was echoed by Senator Mike Mansfield in an emergency forum of the senate.
“This is terrible – I cannot find words,” he said.

A little under an hour after the shooting, a policeman approached Lee Harvey Oswald, believing he recognised his description.
The policeman was shot dead. Oswald was arrested almost immediately under suspicion of murder.
Shortly afterwards, he was also charged with the assassination of President Kennedy.
The suspect was never tried as he was shot dead himself two days later by nightclub owner Jack Ruby.
The Warren Report, commissioned to investigate the president’s death, concluded he had been killed by shots fired by Mr Oswald from the School Book Depository building.
But conspiracy enthusiasts quickly turned the assassination into one of the most disputed events in modern history, with theories ranging from claims it was an elaborately staged suicide to the driver being the murderer.