This day in history | 1964 The Sun newspaper is born 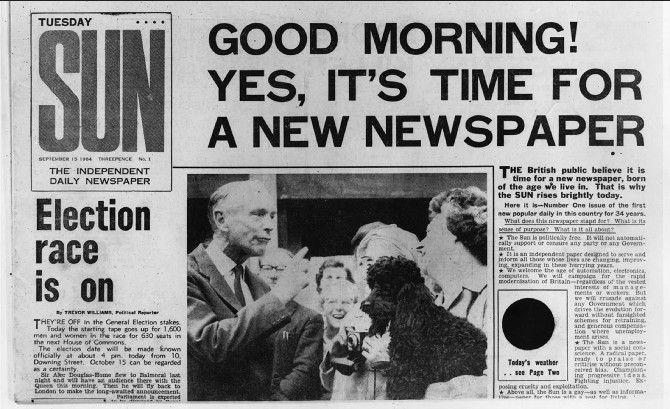 The Sun newspaper is published today for the first time.
It is replacing the Mirror Group’s Daily Herald, which has been losing readers and advertising revenue for several years.
The newest arrival on Fleet Street is promising to follow a “radical” and “independent” agenda – unlike its predecessor which had strong ties to the Labour party. The TUC sold its 49% stake in the paper in 1960.
Mirror Group Newspapers (MGN) and the International Press Corporation (IPC) took over ownership of the Herald in 1961.
It was previously owned by Odhams Press, which had seen it reach a circulation of two million in 1933, the highest in the world at the time.
In a bid to broaden the Herald’s appeal once more, MGN, is relaunching the paper as the Sun, with the slogan “A paper born of the age we live in”.
Editor Sydney Jacobson said his new paper would be “totally independent, no ties with any party or movement… totally free to make up its own mind.”
The paper’s launch coincides with the announcement of a general election next month.
Prime Minister Sir Alec Douglas-Home, whose Conservative party has been in power for 13 years, will be up against the man described as Labour’s thrusting new grammar school boy, Harold Wilson.
Asked where his party’s loyalties would lie in the coming election battle, Mr Jacobson replied: “The Sun is a radical newspaper. Can a radical newspaper support the present government?”
It is a competitive time for newspapers. Faced with rising costs, the Daily Sketch was the first to raise its cover price from 3d to 4d in June, but others are expected to follow suit.
The Daily Mirror – The Sun’s stablemate – has a current circulation of five million but even so it is not expected to be able to resist the price increase beyond the end of the year.
The Mirror Group is splashing out on free beer and christening mugs for new babies to promote the Sun’s arrival and Herald’s demise.

Five years after its arrival on Fleet Street, the Sun was up for sale partly because of losses dating back to its predecessor, the Herald.
As a broadsheet, the paper was attracting a daily readership of one million.
There were two key players interested in buying: the millionaire Labour MP Robert Maxwell and the right-leaning Australian newspaper proprietor Rupert Murdoch, who already owned The News of the World.
Mr Murdoch clinched the deal and immediately relaunched the Sun as a tabloid – shortly followed by the introduction of the Page Three girls.
In 1978 The Sun overtook its closest rival The Mirror in the circulation war.
In 1986 Mr Murdoch introduced new print technology and moved the Sun to Wapping.
In 1997 the Sun returned to its Labour roots and backed Tony Blair for Prime Minister.
In early 2006 the paper’s circulation was 3.1 million.