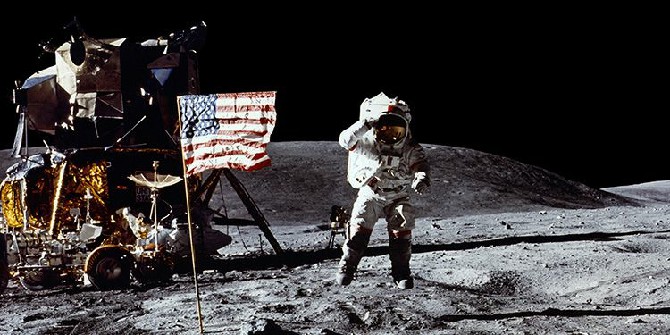 American Neil Armstrong has become the first man to walk on the Moon.
The astronaut stepped onto the Moon’s surface, in the Sea of Tranquility, at 0256 GMT, nearly 20 minutes after first opening the hatch on the Eagle landing craft.
Armstrong had earlier reported the lunar module’s safe landing at 2017 GMT with the words: “Houston, Tranquility Base here. The Eagle has landed.”
As he put his left foot down first Armstrong declared: “That’s one small step for man, one giant leap for mankind.”
He described the surface as being like powdered charcoal and the landing craft left a crater about a foot deep.
The historic moments were captured on television cameras installed on the Eagle and turned on by Armstrong.
Armstrong spent his first few minutes on the Moon taking photographs and soil samples in case the mission had to be aborted suddenly.
He was joined by colleague Edwin “Buzz” Aldrin at 0315 GMT and the two collected data and performed various exercises – including jumping across the landscape – before planting the Stars and Stripes flag at 0341 GMT.
They also unveiled a plaque bearing President Nixon’s signature and an inscription reading: “Here men from the planet Earth first set foot upon the Moon July 1969 AD. We came in peace for all mankind.”
After filming their experience with a portable television camera the astronauts received a message from the US President.
President Nixon, in the White House, spoke of the pride of the American people and said: “This certainly has to be the most historic telephone call ever made.”
Many other nations – including the UK – sent messages of congratulation.
Moscow Radio announced the news solemnly in its 1030 GMT broadcast.
As Aldrin and Armstrong collected samples, Michael Collins told mission control in Houston he had successfully orbited the Moon in the mother ship Columbia, and take-off was on schedule for 1750 GMT this evening.

Neil Armstrong and Edwin Aldrin spent a total of 21 hours on the Moon, two-and-a-half of them outside the landing module.
After re-joining the Columbia mothership the astronauts – including Collins – left the Moon’s orbit on 22 July and returned to Earth on 24 July.
The three men spent the next 21 days in quarantine at an American military base – a procedure dropped in subsequent missions since no alien organisms were found.
The Moon landing marked the pinnacle of the space race and American investment in the space programme declined accordingly.
A further 10 astronauts travelled to the Moon in another six missions with the final manned lunar landing, Apollo 17, completed in December 1972.