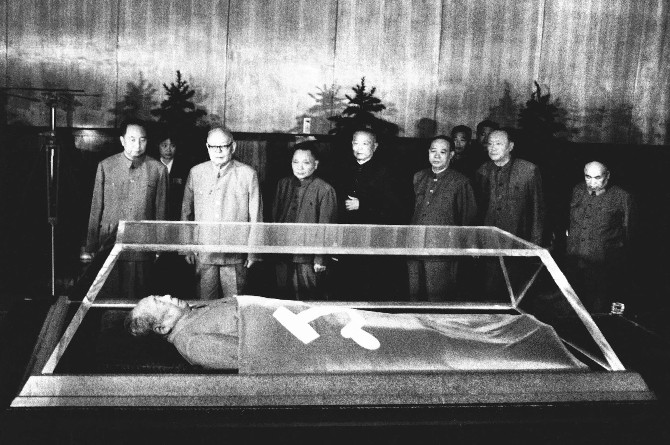 The chief architect of the Chinese revolution, Chairman Mao Zedong, has died at the age of 82.
His death – at 10 minutes past midnight – was announced by the Central Committee of the Chinese Communist Party, the State Council, the Standing Committee of the National People’s Congress and the party’s Military Affairs Commission.
Chairman Mao had been in poor health for several years and had declined visibly in recent months. He had not seen any foreign visitors for some time.
It is not clear yet who will replace him. There is no designated heir to the leadership of China’s 800 million citizens.
News of Chairman Mao’s death has spread quickly through the Chinese capital. Many people are wearing black armbands. Groups have paid tribute opposite a huge portrait of Chairman Mao at the main entrance to the Forbidden City.
His body will now lie in state at the Great Hall of the People. A memorial service will be held in Tiananmen Square on 18 September. Everyone except those performing essential tasks will be expected to maintain a three minute silence.
The official Chinese obituary paid tribute to Chairman Mao’s important struggles against “enemies” within the Chinese Communist Party, which he co-founded in 1921.
He rose to prominence as the man who led the communist forces on the epic 6,000 mile (9,656 km) “long march” to Shenis in northern China to flee attacks from the nationalist Kuomintang party in the mid-1930s.
In 1949 he became chairman of the newly established People’s Republic of China.
During the 1950s, Chairman Mao launched the Great Leap Forward, a campaign to increase industrial production by mobilising China’s enormous manpower into rural peoples’ communes.
Even after he retired as chairman of the republic he continued to influence policy as chairman of the Communist Party.
The Cultural Revolution was launched in 1966. Schools and colleges were closed and the students joined the Red Guards in an ideological crusade which led to many officials losing their jobs, being tortured and killed.
He was credited for encouraging President Richard Nixon’s visit to China in February 1972, the first by an American leader. Other countries opened embassies in Beijing and China was finally granted a seat at the United Nations in 1971.

Mao Zedong was the founder of modern China and is still regarded by the Chinese as one of their great leaders.
His death left a power vacuum in China.
The “gang of four” – leading radicals, including Mao’s widow, responsible for the Cultural Revolution – attempted to take control but were arrested by Mao’s successor Hua Guofeng and convicted of crimes against the state.
Deng Xiaoping emerged as China’s new leader in 1978.
He liberalised academic debate and introduced economic reforms. There was also a move away from the collective idea in the countryside which meant the power of the Communist Party was weakened.
In 1989 he ordered troops to break up the Tiananmen Square pro-democracy demonstration. Hundreds, possibly more, were killed provoking international outrage and sanctions.
He continued to dominate China’s government until his death in 1997.