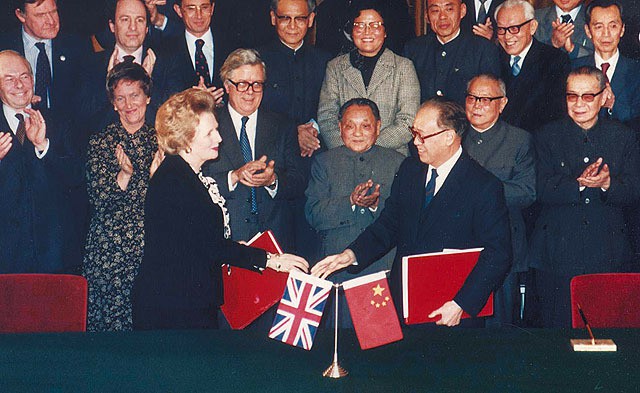 The British colony of Hong Kong is to be returned to China in 1997 after an historic agreement was signed in Peking today.
Prime Minister Margaret Thatcher signed the Joint Sino-British Declaration with her Chinese counterpart Zhao Ziyang.
It formally seals the future of Hong Kong, transferring it from a British colony of six million people to communist China in 13 years.
The agreement, which will end 155 years of British rule in the colony, also launches a new era in trade and diplomacy between the two countries.
Chinese president Deng Xiaoping, who pursued the recovery of Hong Kong, greeted Mrs Thatcher.
The champagne ceremony took place at the Great Hall of the People before delegates who helped draw up the agreement, including 101 guests from Hong Kong.
Mrs Thatcher said: “The circumstances are unique. The agreement is unique.
“It is right that we should feel a sense of history, of pride and of confidence in the future.”
The declaration outlines Hong Kong will be “restored” to the People’s Republic of China with effect from July 1 1997 and will apply for fifty years.
It will be known as the Hong Kong Special Administrative Region (SAR).
Britain has agreed to return Hong Kong after guarantees it will “enjoy a high degree of autonomy, except in foreign and defence affairs”.
And China’s principle of “one country, two systems” allows Hong Kong to have a capitalist economy and enjoy existing rights and freedoms.
The Prime Minister later revealed the negotiation process had been rocky.
When Mrs Thatcher last visited Peking in 1982 the atmosphere was hostile as an agreement could not be reached.
Talks restarted in July 1983 and today’s agreement, which was finalised only ten days before the 30 September deadline, is being hailed as a diplomatic coup.
Mrs Thatcher will visit Hong Kong tomorrow during her whistle-stop world tour.

A bloody crackdown by troops on protests in the Chinese capital, Beijing, in June 1989, known as the “Tiananmen Square massacre” soured relations between Britain and China.
The British Government, fearing for the colony’s future, responded by granting British passports to 50,000 Hong Kong heads of families, building a new international airport, and introducing a Bill of Rights.
Chris Patten, the last Governor of Hong Kong introduced democratic reforms in 1992 which the Chinese Government opposed.
A series of diplomatic meetings between the two governments in 1995 and 1996 improved relations.
On 1 July 1997 a spectacular ceremony in Hong Kong celebrated a new era in its political life as it transferred to Chinese control.