This day in history | 1985 Superpower summit ‘off to good start’ 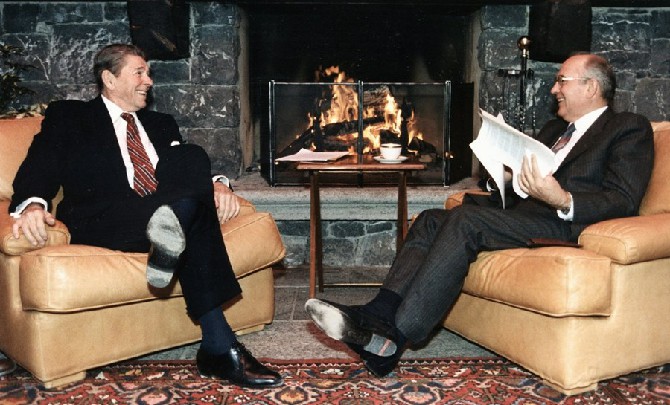 The first meeting in six years between the world’s superpowers – the United States and the Soviet Union – has begun in Switzerland.
Early reports indicate the meeting between President Ronald Reagan and the Soviet leader Mikhail Gorbachev in Geneva has got off to a good start.
Their first get together this morning – at the Villa Water Lily owned by the Aga Khan – lasted four times the scheduled 15 minutes.
The two men were alone apart from their interpreters.
And in the afternoon they unexpectedly went off entirely by themselves for an hour.
However, a key stumbling block to any agreement is expected to be America’s Strategic Defence Initiative (SDI) – popularly known as “Star Wars”.
Mr Reagan believes a defensive shield of laser gun ships in space would guarantee peace.
But Mr Gorbachev believes SDI could upset the nuclear balance and allow a state with the technology to launch an attack untroubled by the threat of retaliation.
Upbeat
There is a complete news blackout on details until the end of the summit on Thursday.
But the general atmosphere was upbeat at the end of the first day with Mr Gorbachev announcing the two men had got down to “serious business”.
“We must achieve decisions together,” the Soviet leader said.
The presidents and their wives later dined together.
The summit continues tomorrow when the leaders are expected to discuss arms control, regional conflicts and human rights.
In the absence of hard news regarding the summit, much interest has been focused on the activities of the leaders’ wives.
On Tuesday Raisa Gorbachev and Nancy Reagan carried out separate public programmes but met for tea in the afternoon.
Reporters have dubbed the women’s alleged desire to be the best-dressed – “Style Wars”.

Both sides painted a positive picture of the summit but the lack of specific details in the subsequent agreement reflected areas of major differences.
The document signed by the two presidents committed them to work towards a 50% cut in their nuclear arsenals and explore the possibility of an agreement on medium range missiles.
It also said they should try and resolve “humanitarian cases” – believed to refer to the USSR granting exit visas to Soviet Jews.
In October 1986 the two men held another summit in Reykjavik in Iceland.
However, after a positive start the meeting ending without agreement when the US insisted it would not give up the “Star Wars” programme.