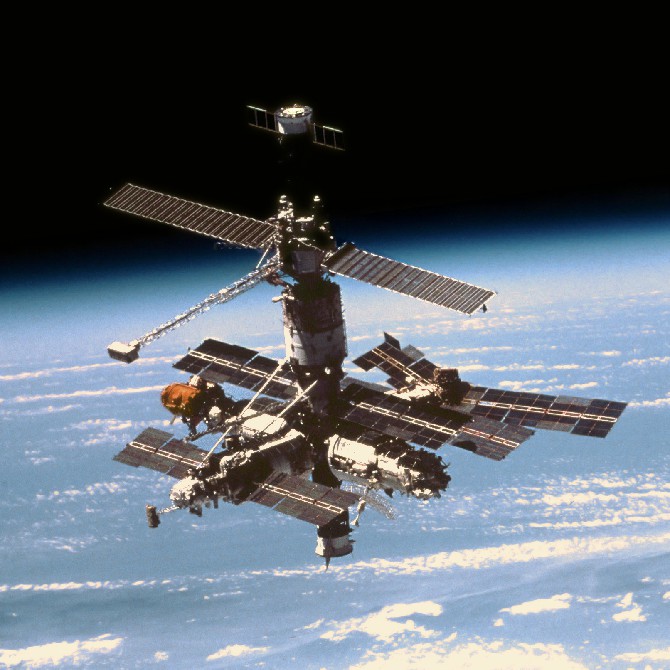 The Soviets have opened a new phase in space exploration with the launch of the world’s biggest space station, Mir.
The successful launch of Mir comes just over three weeks after the American space shuttle Challenger disaster, in which seven astronauts died.
At next week’s Communist Party congress in Moscow the Mir project is likely to be hailed as proof that the Soviets are leading the peaceful exploration of space.
Mir, which means both peace and world in Russian, is intended to provide a base for a permanently manned complex orbiting the Earth.
It succeeds the Soviet Salyut models, the last of which, Salyut 7, was launched in April 1982 and is still in orbit.
The Americans also had a space station, Skylab, which suffered damage on its initial launch and eventually proved too costly to maintain and fell back to Earth in 1979.
Soviet officials say their new craft represents the transition from research to large-scale production activities in space.
The station has six docking stations, which means other modules or laboratories can be added to it, expanding its size and capability.
The deputy head of the Soviet cosmonaut training centre, Alexei Leonov, said it would only be possible to determine how long Mir would remain in orbit after it had completed its first flight.
He said the cosmonauts, now taking part in a special training programme, would have separate cabins with windows and even individual desks and armchairs.
Mr Leonov explained that Salyut 7 was too small for the plans now being implemented by Soviet experts.
It has only two docking stations and can support a crew of only three, whereas Mir can carry between six and ten people.
The main work of the first cosmonauts on board Mir will be to continue with the experiments in materials processing, begun on Salyut 6 and 7.
Other activities will include observation of the Earth using high-powered cameras, as well as helping locate mineral deposits on Earth and monitor the seas for trawlers.

The first crew arrived on board Mir on 15 March 1986 and it remained more or less continuously occupied until November 2000. Crew member Valeri Polyakov stayed up a record 439 days.
The end of the Cold War marked a new era of space co-operation.
In September 1993 US Vice-President Al Gore and Russian Prime Minister Viktor Chernomyrdin announced plans for a new space station, which would later be called the International Space Station, or ISS.
In preparation for this new project, the US became more closely involved with Mir.
From March 1995 seven US astronauts consecutively spent 28 months on Mir, during which time the spacecraft suffered a number of emergencies included a large fire on 23 February 1997 and a collision with an unmanned cargo ship on 25 June 1997.
Mounting costs contributed to the decision to bring down Mir.
While Mir contributed little in the way of scientific advances, it did allow scientists to learn more about how astronauts can survive in space for long periods of time.
Mir remained in space until 23 March 2001, during which time it orbited the Earth more than 86,000 times.
It re-entered the Earth’s atmosphere near Nadi, Fiji, and what remained of the 135-tonne craft fell into the South Pacific Ocean.