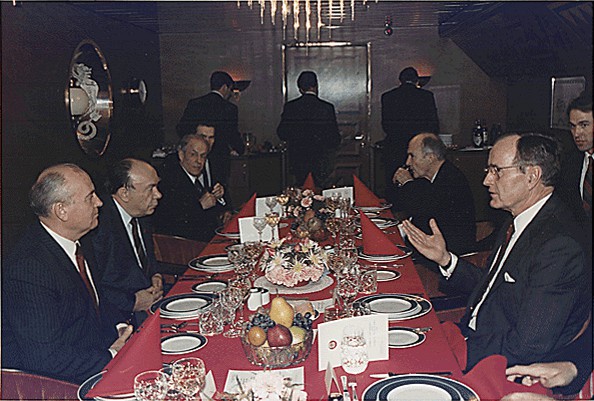 The leaders of the two world superpowers, the USA and the USSR, have declared an end to the Cold War after two days of storm-lashed talks at the Malta summit.
At a joint news conference held on board the Soviet cruise ship, Maxim Gorky, the two men announced they had set the stage for big reductions in troops and weapons in Europe.
The Soviet leader, Mikhail Gorbachev, also said: “I assured the President of the United States that I will never start a hot war against the USA.”
For his part, US President George Bush said: “We can realise a lasting peace and transform the East-West relationship to one of enduring co-operation. That is the future that Chairman Gorbachev and I began right here in Malta.”
The Malta summit is being hailed as the most important since 1945 when Churchill, Stalin and Roosevelt agreed a post-war plan for Europe at Yalta.
The two men have met face-to-face for the first time against a backdrop of fast-moving change in Eastern Europe.
In the past few weeks Hungary has opened its borders with the West, the Berlin Wall has fallen, followed by the government of Czechoslovakia. Only yesterday the fledgling East German government of only seven weeks was also forced to resign.
Both leaders spoke hopefully of the changes sweeping Eastern Europe – but they also spoke of the need for caution, particularly with regard to the future of Germany and the prospect of reunification.
Mr Bush said: “It is not for the United States to dictate the pace of change in Germany or anywhere else.”
Mr Gorbachev said: “The world is leaving one epoch and entering another. We are at the beginning of a long road to a lasting, peaceful era.
[…] The two men have agreed to hold another summit in June next year.

The Malta summit is regarded by many as the official end of the Cold War, although little of substance was actually agreed.
The summit followed a series of arms-reduction treaties between the two superpowers, including Salt II in 1979 and the Intermediate-range Nuclear Forces treaty in 1987.
Presidents Bush and Gorbachev went on to sign a treaty on Conventional Forces in Europe in November 1990, establishing parity between East and West, and the first of the Strategic Arms Reduction Treaties (Start) in December 1991.
The collapse of Communism in Eastern Europe continued with the fall of the Romanian government and the reunification of Germany in 1990.
Although Mikhail Gorbachev was seen as a hero by the outside world, within the Soviet Union the slow progress of reform and declining economic conditions eventually led to the break-up of the union and his resignation in December 1991.