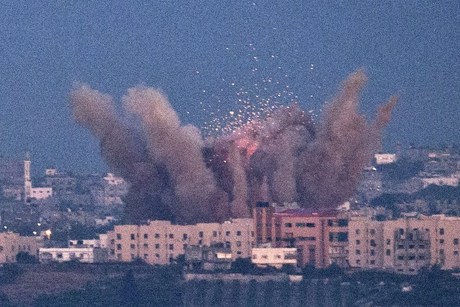 Iraq has attacked two Israeli cities with Scud missiles, prompting fears that Israel may be drawn into the Gulf War.
Israel’s largest city, Tel Aviv, and Haifa, its main seaport, were hit in the attacks, which began at 0300 local time (0100 GMT), when most residents were asleep.
Reports from Tel Aviv say the air was filled with the wail of sirens and minutes later up to eight missiles streaked in and exploded in balls of flame.
Residents scrambled for protective clothing and gas masks, issued to most of the population before the conflict began.
Casualties are believed to have been light – nobody was killed, and only a few people injured.
It is the first time Tel Aviv has been hit in the history of the Israel-Arab conflict.
Initial reports that one of the missiles had a chemical warhead were quickly proved wrong.
Air raid sirens went off again this evening amid fears of a second Scud attack, but they were swiftly followed by an all-clear as it proved to be a false alarm.
Israel has the strongest military forces of any Middle Eastern country, and has said that any attack by Iraq would bring massive “punishment”.
The American President, George Bush, issued an appeal to Israel to hold back from retaliation for the attack.
Allied commanders have been ordered to make special sorties to seek out and destroy Iraqi missile sites and mobile launchers which could threaten Israel, and Mr Bush emphasised his determination to protect Israel from further attack.
The Israeli Prime Minister, Yitzhak Shamir, called an emergency meeting of the ministerial defence committee of senior ministers and military officers to decide Israel’s response.
After the day-long meeting, the Foreign Minister, David Levy, told journalists no decision had yet been taken on whether to retaliate.
“Israel reserves the right to retaliate in the manner and with the scale and method of its own choosing,” he said.
Any Israeli military action could break apart the multi-national coalition against Iraq by provoking the Arab members to withdraw their support.
Meanwhile, the Allied air bombardment of Iraqi military targets is continuing at the rate of 2,000 sorties a day.

Israel decided to leave retaliation to Allied forces, to the relief of the Coalition.
Iraq fired Scud missiles at Israeli cities again the next day and throughout the Gulf War, but failed to provoke Israel into unilateral retaliation.
After more than a month of intensive air attacks, the Allies launched a land offensive on 24 February. One day later, the Iraqis began retreating.
On 28 February, President George Bush declared victory. Kuwait was liberated but Saddam Hussein remained in power in Baghdad.
The US and Britain launched a second war against Iraq in 2003. Saddam Hussein was overthrown and captured to be put on trial for war crimes. He was eventually executed in December 2006.