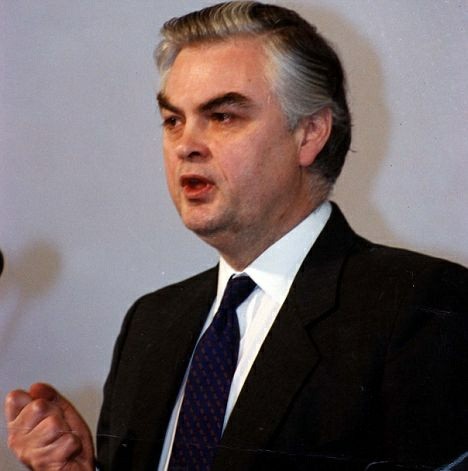 The government has suspended Britain’s membership of the European Exchange Rate Mechanism.
The UK’s prime minister and chancellor tried all day to prop up a failing pound and withdrawal from the monetary system the country joined two years ago was the last resort.
Chancellor Norman Lamont raised interest rates from 10% to 12%, then to 15%, and authorised the spending of billions of pounds to buy up the sterling being frantically sold on the currency markets.
But the measures failed to prevent the pound falling lower than its minimum level in the ERM.
The second rise in the interest rate was reversed by the beleaguered chancellor soon after the withdrawal from the ERM, setting it at 12%.
The move is a dramatic U-turn in government policy, as only last week Prime Minister John Major reaffirmed the government’s commitment to remaining within the mechanism.
Mr Lamont admitted it had been an extremely difficult and turbulent day, but a Downing Street spokesman said he would not resign.
The shadow chancellor, Gordon Brown, said colossal errors of judgement by the prime minister and chancellor had betrayed the British people.
Liberal Democrat leader Paddy Ashdown said the government’s policy had failed.
“They have lost control of the economic situation,” he told the BBC.
But both politicians stopped short of calling for the chancellor’s resignation.
Britain’s decision to join the ERM in October 1990 represented a major shift in the direction of the government and has become a cornerstone of the country’s European policy.
But Conservative MP for Stone William Cash, said the policies of the government and the chancellor should now be reconsidered.
“I think that the position of Norman Lamont at the moment is extremely precarious… We are in a state of political shambles,” he said.

All member countries agreed to keep their currency value within set limits linked to the German mark.
As a consequence they were forced to adopt the anti-inflation policies of the German Bundesbank.
Membership of the ERM has become a Brussels-imposed condition to joining the Euro – Europe’s single currency.
Britain did not rejoin after 16 September 1992 – a day which became known as “Black Wednesday”.
Seven months later in May 1993, Norman Lamont was replaced as chancellor by Kenneth Clarke.
He became a fierce right-wing critic of John Major’s government.
In the 1997 general election he lost his House of Commons seat and a year later was made a life peer.