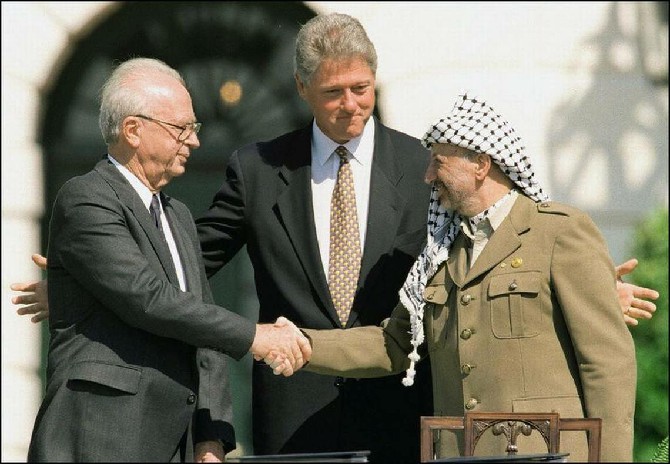 The Prime Minister of Israel, Yitzhak Rabin, and the PLO leader, Yasser Arafat, have shaken hands before cheering crowds on the White House lawn in Washington.
The handshake – the first ever in public between the two former arch enemies – marked the signing of a Declaration of Principles for peace between the Arabs and Israelis.
Under the terms of the deal, Israel has agreed to withdraw its troops from Gaza Strip and West Bank by April 1994. Elections will be held in the territories to allow the Palestinians some form of self-government.
A deadline for a final settlement has been set for February 1999.
The deal has only been made possible by talks brokered by the Norwegians earlier in the year – and by the election of Mr Rabin’s Labour government which includes the pro-peace campaigners Shimon Peres and Yossi Beilin.
President Bill Clinton introduced the two leaders to the crowd of invited guests in front of the White House. By his side, were former Presidents Jimmy Carter and George Bush who had vigorously campaigned for peace during their terms in office.
Mr Clinton said: “The peace of the brave is within our reach. Throughout the Middle East there is a great yearning for the quiet miracle of a normal life.
“We know a difficult road lies ahead. Every peace has its enemies.”
The leaders did not sign the declaration themselves. Instead, Israeli Foreign Minister Shimon Peres and his Palestinian counterpart did the signing.
Mr Rabin then addressed the crowd: “We who have fought against you the Palestinians, we say to you today in a loud and clear voice, enough of blood and tears, enough.”
Mr Arafat said: “The difficult decision we reached together was one that required great courage.”
The BBC’s correspondent John Simpson said Mr Arafat had undoubtedly put his life on the line for this agreement.

The Declaration of Principles paved the way for Israel’s first withdrawals from occupied territory and Yasser Arafat’s triumphant return to Palestinian territory in July 1994.
He was elected president of the Palestinian National Authority in 1996.
Yitzhak Rabin was assassinated by a Jewish extremist wanting to prevent further Israeli withdrawals on 4 November 1995.
Binyamin Netanyahu of Likud won Israeli elections in 1996. He agreed to a withdrawal from Hebron in the West Bank but talks on further peace moves with the Palestinians stalled.
His successor Ehud Barak was equally unsuccessful and in the impasse veteran right-winger Ariel Sharon toured the al Aqsa mosque/Temple Mount complex in what was seen as a provocative move by the Palestinians.
Demonstrations soon turned into another uprising or intifada.