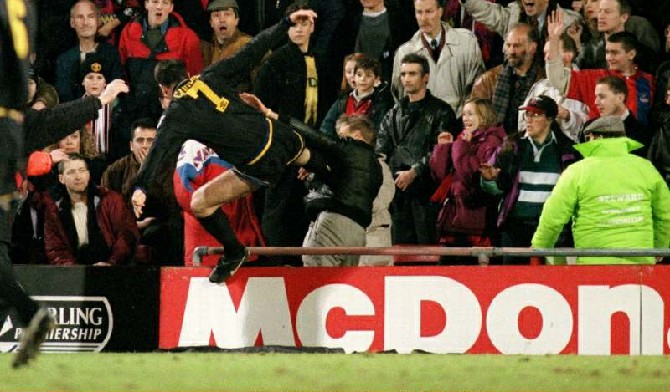 Manchester United’s Eric Cantona has been fined £20,000 and banned from playing football over his kung fu-style attack on a fan.
The club has relegated the French star striker to the bench for nine months for lashing out at a fan in the front row during a game against Crystal Palace two days ago.
Cantona has also been stripped of his captaincy of the French national team and he has lost his place in the side.
Cantona claims the fan, Matthew Simmons, shouted racial insults and threw a missile at him as he walked off the pitch after being given a red card for kicking another player during a tackle.
The Frenchman leapt at the fan, aiming both feet at his chest. He then threw several punches, before police, stewards and other members of the crowd managed to pull him off. Fellow United player, Paul Ince, is also reported to have thrown some punches.
Cantona’s fiery temper has got him in trouble before. In 1987 he punched his own team’s goalkeeper at Auxerre, leaving him with a black eye. He was also suspended by Marseille for kicking a ball into the crowd and throwing his shirt at the referee after being substituted.
Cantona retaliated by retiring from the premier league in France – and moving to England.
The number seven player – and his teammate Ince – are still facing a criminal investigation following assault charges brought by police.
At a news conference earlier today, United chairman Martin Edwards appeared to suggest Cantona could still play this season for the reserves – in order to keep himself fit.
However, this has already been ruled out by Football Association Chief Executive Graham Kelly.
He said: “I don’t think there’s any real prospect that he’ll be playing for Manchester United reserves, A team or whatever, between now and the date of his commission hearing here.”
The hearing will take place in three weeks’ time and is likely to confirm the player’s suspension.
Crystal Palace has withdrawn Mr Simmon’s season ticket for breaking ground rules.

Cantona was sentenced to two weeks in prison which was reduced on 31 March to 120 hours community service for the attack.
During a news conference Eric Cantona cryptically referred to the British press as “a flock of seagulls following the trawler”. Cantona then returned to action for Manchester United on 1 October and scored a penalty in a 2-2 draw against Liverpool.
In 1996, he was voted Footballer of the Year by the Football Writers’ Association. He also scored the winning goal in the FA cup final against Liverpool to give United the double for the second time in three seasons.
After winning the Premiership with United in 1997, he announced his retirement from football at the age of 30.
He has since turned his attentions to acting, appearing in several films.
He has also returned to United to coach children and become an ambassador for beach football.