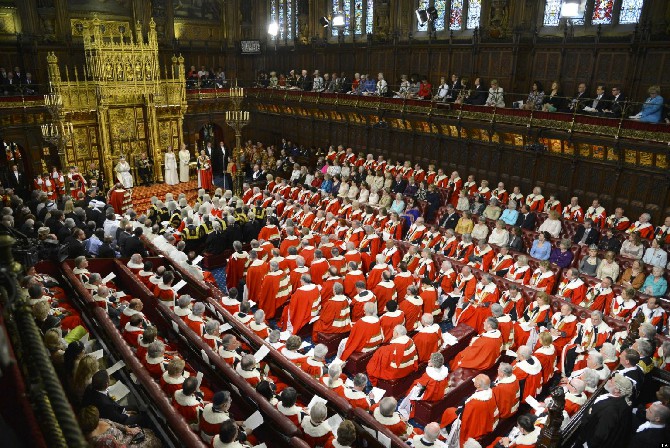 The government has unveiled its plans to abolish the rights of 700 hereditary peers to sit and vote in the House of Lords.
The proposal has been outlined in the Queen’s Speech during the UK’s annual state opening of Parliament.
It is the second legislative programme drawn up by Prime Minister Tony Blair’s Labour government since it won a landslide general election victory in 1997.
The Queen told Parliament that: “It will be the first stage in a process of reform to make the House of Lords more democratic and representative.”
Change in the House of Lords, which scrutinizes and amends government bills but cannot veto them, has been widely anticipated.
As one of the most radical policy proposals put forward by the government it could be a source of confrontation between the House of Commons and the House of Lords.
In an unprecedented outburst, the Queen’s Speech was interrupted by loud mumbles of “hear hear” from Labour MPs who traditionally gather in the House of Lords for the occasion.
It is normally listened to in total silence and some peers appeared to respond to the interruption with shouts of “shame.”
One person sitting in the House of Lords was Lady Haden-Guest, better known as the Hollywood movie actress Jamie Lee-Curtis – star of such films as a Fish Called Wanda, Trading Places and Halloween.
But as the wife of the crossbench hereditary peer Lord Haden-Guest of Essex, it could be the first and last time she is allowed take her place in the upper chamber.
Her husband stands to lose his rights as a peer if the legislation is passed.
Labour has complained, both in opposition and in office, that the large number of hereditary peers give the Conservatives an in-built majority which makes it difficult for the government to pass legislation.
A new system of appointments to the upper chamber consisting solely of life peers and the establishing of a Royal Commission to review further changes, will be published in a government white paper.
[…]

Although there was some opposition to the bill, 666 hereditary peers lost their rights as Lords in 1999.
Until then 1,144 members sat in the House of Lords.
At present 695 peers sit in the House of Lords (excluding 13 peers who are on a leave of absence), 90 of whom are hereditary.
They were allowed to remain in the upper chamber as part of a deal worked out while the government proceeds with the second stage of its reform plans.
But since 1999 reform has stalled with MPs and peers failing to agree on seven options for change.
There has been continued debate on whether the House of Lords should consist of elected peers or those appointed through a public body, or both.
A bill to remove the remaining hereditary peers has been put on hold until after the next general election, but Constitutional Affairs Secretary Lord Falconer has said Labour would press to make the House of Lords more democratic.