This Day in History | 1999 – Putin takes over as Yeltsin resigns 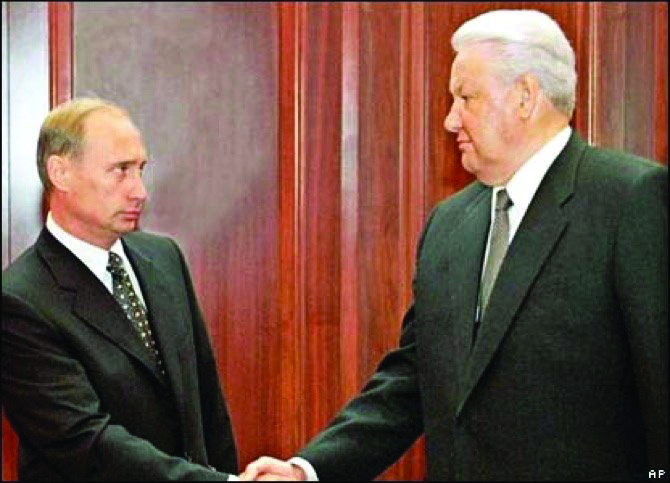 Boris Yeltsin has resigned as Russian president, taking the country and the rest of the world completely by surprise.

Mr Yeltsin made the shock announcement live on Russian television and said Prime Minister Vladimir Putin will take over as acting president, with elections now due to take place on 26 March 2000.

“I am going. I am going earlier than my established time,” he said.

The 68-year-old had repeatedly said he would serve out his second and final term in office, which was meant to continue until June 2000.

Mr Yeltsin asked for forgiveness for what he called the errors of his administration, and said Russia needed to enter the new century with new political leaders.

It was an unusual admission from a man who, during his eight years as president, rarely said he was wrong.

Mr Yeltsin’s time in office has been a traumatic one for Russia which, since the collapse of the Soviet Union in 1991, has had to transform itself from a state-run economy into a free-market one.

He spearheaded economic reforms that have favoured some but seen the living standards of many worsen.

In 1998 the rouble lost 70% of its value against the dollar and 29% of the population (42 million people) were living below the poverty line.

But US President Bill Clinton praised Mr Yeltsin for bringing democracy to Russia, and UK Prime Minister Tony Blair said the world was “more stable and secure” as a result of the former president’s leadership.

The briefcase which contains the codes that control Russia’s nuclear arsenal has been handed over to Mr Putin.

Once an intelligence officer with the KGB and then in 1998 head of Federal Security (the new title for the KGB), he was a little known figure until he became prime minister in August.

But with a 60% opinion poll approval rating, Mr Putin is now widely seen as Russia’s most popular politician who offers strong leadership.

Following last year’s economic crisis and his tough handling of the war in Chechnya, Mr Putin’s no-nonsense approach has appealed to many Russians.

In a New Year’s address, which has been broadcast in Russia’s Far East, Mr Putin said: “There will be no power vacuum even for a moment.”

Mr Putin is not bound to find a successor but has indicated he will continue in the post at least until next month.

The Russian stock market rose sharply on news of the resignation, up nearly 17% by mid-day on heavy trading.

The country suffered from widespread corruption and enormous political and social problems.

Mr Yeltsin played a key role in bringing down the Soviet Union in 1991 but this euphoria was short lived.

By the time he left office his radical economic reforms had led to the irreversible destruction of the Soviet economic system.

One third of the country was living below the poverty line, free healthcare was for most a distant memory, and the country’s population was rapidly shrinking.

He later described his decision to send the Russian army into the breakaway republic of Chechnya, at the end of 1994, as his greatest mistake.

An estimated 100,000 people lost their lives and in 1996 the Russian army was forced into a humiliating withdrawal – before it was sent back again in 1999.

But Mr Yeltsin did manage to carry the rest of Russia through a turbulent transformation with far less bloodshed than many had feared.

And the West saw him as the best guarantor of stable East-West relations.

His decision to choose Vladimir Putin as his successor provided Mr Putin with a springboard to launch his campaign in the 2000 election – which he won.