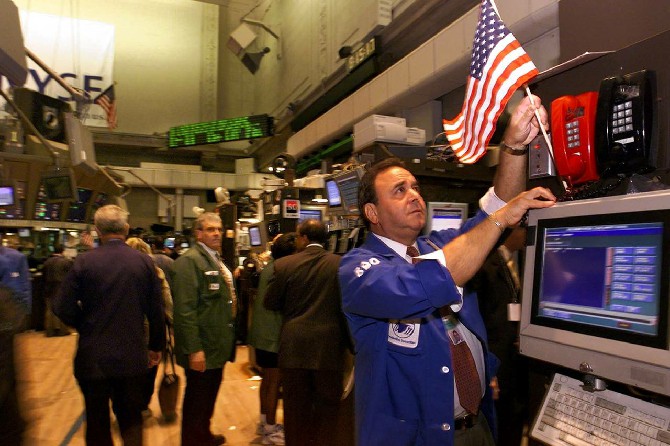 New Yorkers have been returning to work six days after the terror attacks which devastated the heart of their city.
Thousands are believed dead after hijackers deliberately flew three passenger planes into buildings in New York and Washington.
Workers from New York’s financial district – many of them draped in the American flag – have said they want to show life can go on.
The air was still thick with dust and smoke from the collapsed towers of the World Trade Center and dozens of those going back to work wore face masks to protect themselves.
The devastation and the troops lining Wall Street made the city look more like a war zone than a business district, but the people who work here were determined to prove their defiance.
“They expect us to be down on the floor – if it lifts everyone’s spirits then I’ve done something good today,” one man told the BBC.
Jim Textor, a lawyer forced to flee the carnage on 11 September, said Americans wanted to imitate the British way of dealing with years of attacks by the IRA.
“It’s important you demonstrate that you can’t be beat and that you have to go back to work,” he said.
But there was also grief in a city which has lost so many.
As the search for survivors in the wreckage of the towers becomes a hunt for bodies, American Red Cross workers mingled with the crowds to offer counselling.
“It doesn’t matter if you’re rich or poor, young or old, you still have those same feelings of trauma,” said Pam Jennings.

It took almost nine months to clear the millions of tons of rubble at “Ground Zero” where the World Trade Center had stood.
The stock markets returned to their pre-attack levels in about one month, but the recession which financial analysts had been predicting long before 11 September took hold at the end of November 2001.
The world’s airline industries particularly felt the impact, and many announced sweeping job cuts in the months after the atrocity.
But many experts said companies whose profits were already declining had decided to ‘blame it on Bin Laden’ and use him as a scapegoat for all losses.