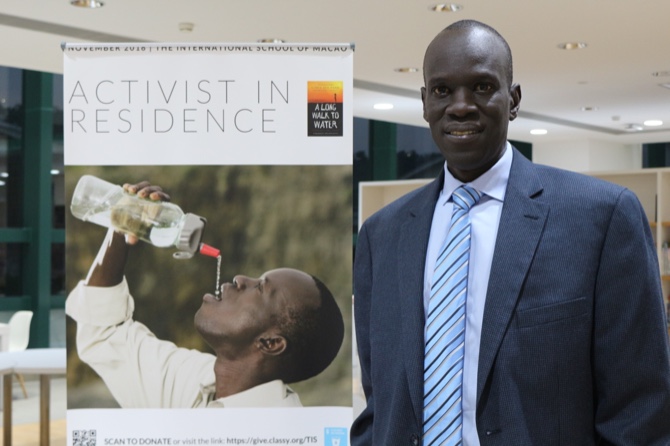 The International School of Macau debuted its “Activist- in-Residence” series yesterday, holding activities for its students with the mission of raising awareness of the need for clean drinking water in South Sudan.

Founder of Water for South Sudan, Salva Dut, hosted the activities sharing the mission of the organization: to provide clean drinking water to South Sudan residents who do not have access to it.

Speaking to the press, Dut said, “We have drilled 349 wells so far, serving a quarter million people. We’re doing hygiene and sanitation [education] too. We’re doing a lot there; it’s […] making a difference.”

Water drilling takes place in the dry season from December to June, and it takes about three to four days to build a well. Once complete, each well pumps approximately 1,800 gallons of water per day and serves approximately 600 to 750 people.

According to Dut, the need is still “tremendous” and a small amount of support from the local community would significantly help the foundation dig more wells.

Dut also shared a book titled “A Long Walk To Water,” his autobiography. Coming from the Dinka tribe and one of the Sudanese ‘Lost Boys,’ he was separated from his family at the age of 11 when the Sudanese civil war reached his village.

He joined thousands of boys who became known as the “Lost Boys” on their journey on foot to seek safety in refugee camps in Ethiopia and Kenya.

Dut lived in refugee camps for 10 years before moving to the United States.

The founder of the organization was inspired to bring clean water to his country when his father in Southern Sudan was suffering from water-borne parasites and disease.

“This world is so small, we’ve become one village. Whatever’s happening in this part of the world is all our problem together and we should always look on people who cannot help themselves and be able to help them,” said Dut.

“I’m just happy to see young kids seeing the world in a different way. It makes me feel proud that these are [going to be] good leaders,” he added.

Meanwhile, the co-founders of Inspire Citizens, Aaron Moniz and Steve Sostak, are also in the city aiming to inspire students and teachers towards community-driven action, identity and learning.

Sostak highlighted that it is vital for schools to embed global competence frameworks and sustainable thinking in an institution’s curriculum.

“That’s what learning is all about: applications to the real world and making a difference,” said Sostak.

The organization aims to bring such talks to schools for students to build a connection to social activities, which would benefit people who are in need.