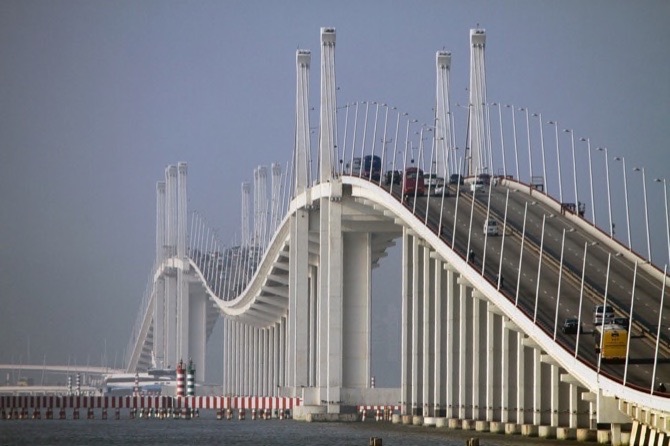 A new speed detection system has been put into operation on the Amizade Bridge starting yesterday, a Public Security Police Force (PSP) spokesperson warned during a press conference.

The system makes use of an average speed detection camera controlling the time each vehicle takes to complete the bridge route, from one side to another. From this data it calculates the average speed the vehicle traveled at during its crossing.

The purpose behind the new system is to deter drivers from speeding in between speed control traps.

The previous system monitored instant speed detection, or the speed a vehicle was traveling at a specific point. In theory, this allowed drivers to speed up until the speeding control point, when they drastically reduced their velocity to avoid detection.

However, upon reviewing Decree-law 70/95/M, which regulates the Nobre de Carvalho Bridge, Amizade Bridge, and access flyovers, the Times has learned that there is no provision allowing for average speed detection cameras. Accordingly, it is not known how the authorities can legally penalize speed limit violators.

“There has to be an act to define the prohibited practice and to sanction it,” said lawyer Jorge Menezes. “Such an act has to come from the Chief Executive and by regulation, unless [the regulation] existed previously and was just not being enforced.”

Article 6 of the aforementioned law states, “Vehicles in circulation on Bridges and Access Flyovers shall be subject to the following maximum and minimum instantaneous speed limits.” This allows only “instantaneous” limits and, by non-mention, excludes the average speed system introduced by the authorities.
For the legal expert the case is clear, “only what is included in legal provisions can be punishable. Therefore, if the [average speed control system] is not foreseen, it would be illegal to fine users using it.”
Another lawyer presented a different perspective to the Times. José Alvares, said that in his opinion, no law amendments should be required in order to implement the new system.

“In my opinion that is legal,” said Alvares, as the principle is based on the fact that, at some point, the speed limit would have been breached. “Thus no amendment [to the law] would be required to punish drivers for exceeding the speed limits based on a device that measures the average speed of any driver on any bridge in the Macau SAR,” he added, as opposed to a system that detects the violation in a slightly different way.

“Given that crossing any bridge in Macau takes a maximum of 10 minutes – and that one cannot stop on the bridge – and that such crossing does not allow alternatives routes, I believe the breach of the law would be clearly identified in terms of the perpetrator, time and location.”

The lawyer also noted that in such cases, “what must be deemed proven is that a violation occurred.”

In addition to the average speed detection system, the authorities have also started to enforce a new speed trap, of the instantaneous kind, at the entrance of the flyover that gives access to the same bridge on the Macau side. The circulation speed is limited to a maximum of 40km/h, according to Decree-law 70/95/M.

For drivers that exceed such speed limits (40km/h at the flyover and 80km/h on the bridge deck), there are fines established that range from MOP600 to MOP40,000, as well as penalties for other offences, including violating a driving ban.
The Times requested further comment from the PSP, but it was not possible to obtain a response before press time.