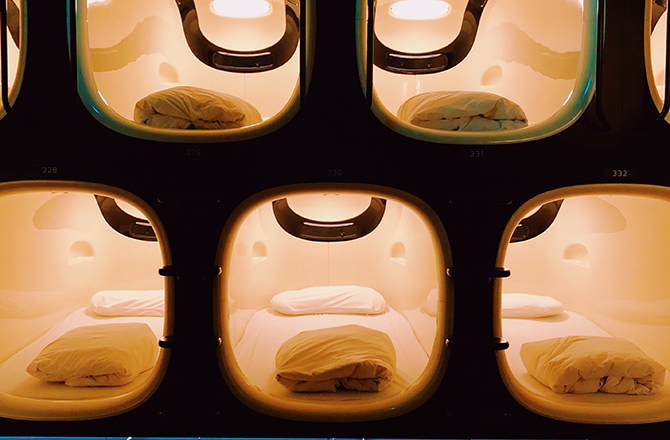 The addition of capsule accommodations will enrich tourism elements and choices of accommodation in Macau, Andy Wu Keng Kuong, chairman of the Travel Industry Council of Macau, told the Times in an exclusive interview.
A Standing Committee of the Legislative Assembly has concluded its discussion on new legislation intended to govern matters related to tourism accommodations. Some opinions have been taken by the executive branch while others have not.
The bill will be sent to the parliament’s plenary for debate and voting. Historically speaking, a bill handed in by the executive branch normally will pass.
In the bill there is a section proposing to allow the future establishment and licensing of capsule hotel. Also known as youth hostels in some cases, this type of accommodation is rented per bed space, instead of per room as in traditional or star-rated hotel accommodations.
Likely to be a reality after this legislative term, the concept has Wu’s support. Considering the success that the concept enjoyed in other tourism destinations, Wu thinks it worthy of exploring in Macau. Moreover, he thinks it is about choice and safety.
“It will provide wider choice,” Wu said. “Furthermore, with a law regulating the practice, there will be greater protection for tourists. It will [allow for the banning of] illegal hostels.”
Illegal hostels are part of a scene in certain areas in the city – often around casinos. They are rented for a low price and usually a long period.
Another factor Wu admired is that the low price of the accommodation will help lengthen each tourist’s period of stay.
Discussing the concept of youth hostels, he thinks it will enhance Macau’s positioning as a cultural tourism destination.
Taking similar facilities in Tokyo and Taipei as reference, youth hostels mostly cater to students or recent graduates who want to travel with a relatively tight budget.
Wu agrees that these tourists are usually more attracted to or interested in Macau’s cultural landscape, such as the Cultural Heritage.
“Youth hostels will also help bring tourists into the community,” Wu added.
He thinks youth hostels may be appealing to younger tourists if they provide appropriate facilities. “If there is fast WIFI and other supporting facilities, youths will choose to stay in these hostels,” Wu expects.
Most tourism products in Macau currently target a wealthier cohort of tourists, such as high-end shopping malls and Michelin-starred restaurants. When asked whether capsule accommodations, or youth hostels, will create strong competition for the gambling concessionaires, Wu said it was unlikely. He foresees that this type of accommodation will be a minority in the field.
After all, it is investors’ call whether or not this type of accommodation become a reality in the city. “Comparatively small hostels see weaker competitiveness against large hotels and resorts,” Wu explained. “I believe they will do their calculations.”