Travelog | Going somewhere? Some places offer trips to the unknown 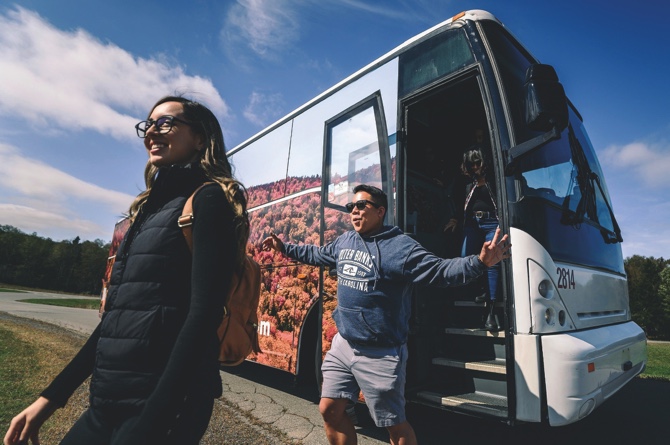 When Dena Espenscheid answered an advertisement on social media offering a weekend vacation to an unknown destination, her sister warned her she was going to get kidnapped.

As it turns out, not only was the offer legit, Espenscheid said she “had a blast.”

The West Virginia Division of Tourism arranged the free trip earlier this month to promote the state as a perfect fall destination. The only clues: Show up in layered clothes and hiking boots and have a sense of adventure.

Five hundred people applied; 33 were chosen. They were told to show up at a Washington, D.C., bus station at 7 a.m. for the trip that would return them the next day.

The next clues came when they saw the bus, which was labeled “Destination Unknown” but had a West Virginia license plate. The sides were covered in a photo of red, orange and yellow fall foliage, “and we’re heading west,” Espenscheid said.

That gave them a general idea, but still, what was there to do?

Plenty. And that was the point of the trip, which was open to residents of Virginia, Maryland and Washington, D.C.

“I had never thought ‘Hey let’s go to West Virginia for the weekend.’ Outside of Harpers Ferry I did not know what West Virginia had to offer,” Espenscheid said.

Mystery trips have grown into their own industry, both for individual and group travel. Whether traveling by bus, train or plane, these vacations vary widely in length, expense and destination.

Often, clients are given a general idea where they’re going. Others aren’t told until they arrive at the airport. Some trips are even bought as gifts for others. 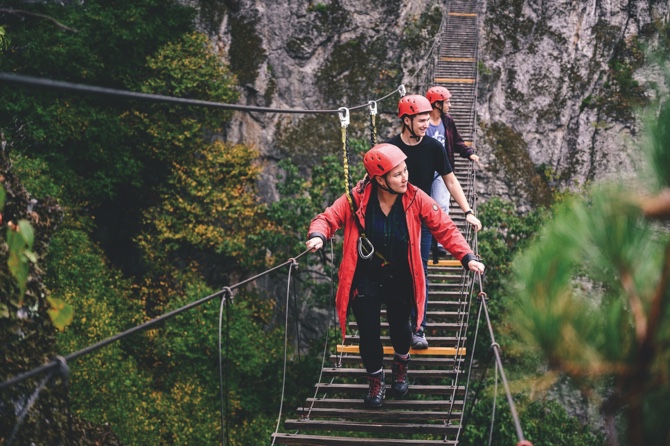 Jennifer Wright, from foreground, Anthony Bolgnese and Asher Groeschler hiking along a guided path at Nelson Rocks near Circleville 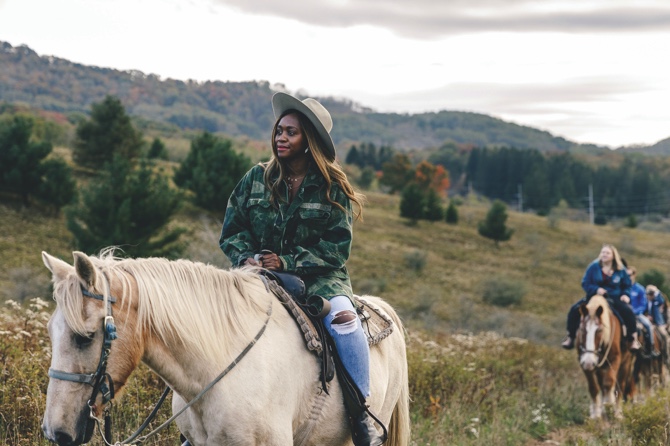 Mystery trip organizers can help clients who have a hard time making a decision, are overwhelmed with where they want to go or have done so much research that the excitement is gone, said Denise Chaykun Weaver, who started Magical Mystery Tours nearly a decade ago after she arranged a trip for a friend on a whim to San Francisco. Her firm now books hundreds of trips per year.

“There’s this magical thing about a mystery trip in that you don’t have control. You don’t know where you’re going,” she said. “Surprises are really fun.”

Many companies offer trips based on clients’ interests, so there’s no arm twisting. Travelers aren’t going to be sent on a skydiving trip if they’re afraid of heights.

“We definitely get a lot of ‘I want a beach, I want something warm,’” she said.

Pink Bus Mystery Trips of Fargo, North Dakota, started in 2007 as a fundraising event for ALS research and now plans vacations for women. It took groups on sold-out trips to Michigan in June and Texas in October and plans a two-week trip to Scandinavia next September.

Among other online trip organizers are Pack Up + Go and SurpriseMeTrips . Upscale vendors include The Travel Mechanic and the Black Tomato while Rustic Pathways specializes in summer group packages worldwide for students.

Espenscheid, a public speaker from Quantico, Virginia, said the West Virginia trip was especially attractive because her busy work schedule is already mapped out and involves a dress and high heels. She recently went to Miami for speaking engagements and had another one in the works to Nashville.

“How nice would it be to travel on a weekend and not have to plan it?” she said.

A few hours into the West Virginia mystery trip, her group stopped at Blackwater Falls for a gourmet lunch.

“Something out of a dream,” Espenscheid said.

There also was horseback riding and hiking to Seneca Rocks that took them nearly 900 feet above the valley floor.

The group enjoyed dinner, poking around shops, cafes, breweries and other nightlife in the former coal mining and timber towns of Davis and Thomas. They watched musical acts at a general store-turned-cafe and concert venue, and spent the night at Canaan Valley Resort and Conference Center.

By the next evening, Espenscheid was back home — her sister didn’t have to worry any longer.

“I would absolutely do it again,” Espenscheid said. “It got me out of my comfort zone. If I can sign up for another destination unknown where I’m not planning anything? It’s part of the adventure.” John Raby, AP