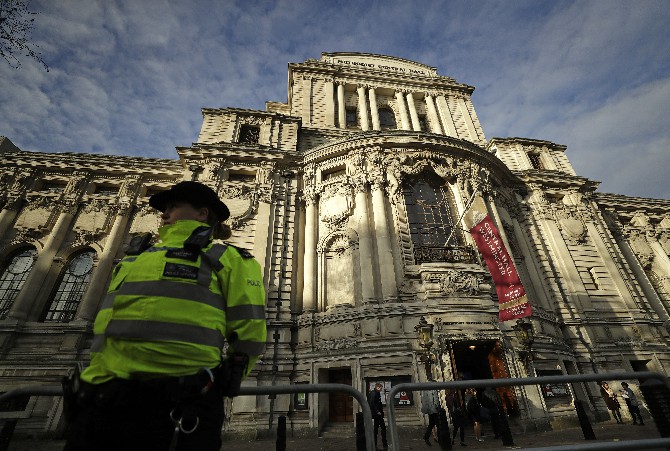 U.S. President Donald Trump yesterday took aim at President Emmanuel Macron over the French leader’s criticism of NATO, and criticized the other members of the military alliance for being too slow to beef up their defense budgets.
As prime ministers and presidents of the 29-member alliance converged on London for a summit marking NATO’s 70th birthday, Trump told reporters Macron’s comments were “very nasty” when he lamented the “brain death” of the organization due in large part to a lack of U.S. leadership.
“Sometimes he’ll say things that he shouldn’t say,” Trump said. “Sometimes I think he does things that are counterproductive for his own country.”
During campaigning for the last election, Trump described NATO as “obsolete.” He has since tempered his criticism somewhat.
Relations between the U.S. and France are particularly strained this week after The U.S. Trade Representative proposed introducing tariffs on $2.4 billion in goods in retaliation for a French tax on global tech giants including Google, Amazon and Facebook. Trump and Macron are due to meet on the sidelines of the summit.
Discussing military funding, Trump noted that “a lot of countries haven’t paid.”
After Russia annexed the Crimean Peninsula in 2014, NATO countries halted their post-Cold War spending cuts and began increasing spending. They pledged to “move toward” spending 2% of GDP on their national defense budgets by 2024.
“You could make the case that they’ve been delinquent for 25-30 years,” Trump said, after talks with NATO Secretary-General Jens Stoltenberg. He added that the figure of 2% “is a very low number, it really should be 4.”
Stoltenberg, given the unenviable task of trying to hold NATO together as its leaders take pot shots at each other, said that “we’re doing more together, North America and Europe, than we have done in many decades.”
European allies and Canada are forecast by the end of this year to have increased defense spending by $130 billion since 2016. NATO predicts they will be spending $400 billion more by 2024.
The summit in London comes amid a series of spats between leaders that threatens to expose a lack of unity that could well undermine the military organization’s credibility.
Macron insisted ahead of the meeting that the endless spending debate should be set aside so that NATO can focus on important strategic questions like who its enemies really are, how to improve ties with Russia and what to do with an unpredictable ally like Turkey.
In turn, Turkish President Recep Tayyip Erdogan has lashed out at Macron, and the very public arguments bode ill for a summit hosted by British Prime Minister Boris Johnson, who is deep into an electoral campaign and desperately wants to smooth things over.
Ankara raised the ire of its allies by invading northern Syria, and for buying Russian air defense systems with powerful computers aboard that suck up data and would compromise the military equipment of allies if they were stationed nearby.
Before heading to London, Erdogan suggested that Turkey might not back Poland and NATO’s Baltic allies — Estonia, Latvia and Lithuania — should they require defending unless the allies support Turkish concerns about Syrian Kurdish fighters, which Ankara sees as terrorists.
That threat raises new questions about NATO’s commitment to its collective defense clause — Article 5 — under which all allies vow to come to the aid of a member under attack. The clause has only ever been activated once, after the 9/11 attacks in the United States.
The two-day summit kicks off with receptions at Buckingham Palace and Downing Street. One short working session will be held at a golf resort in outer London on Wednesday. The aim is to issue a joint declaration — if the summit can survive the friendly fire.
Trump is due to hold separate talks with Macron, German Chancellor Angela Merkel, Danish Prime Minister Mette Frederiksen and Italian Premier Giuseppe Conte on the sidelines of the summit. Johnson is also set to host talks on Syria with Macron, Merkel and Erdogan today. LORNE COOK, LONDON, AP