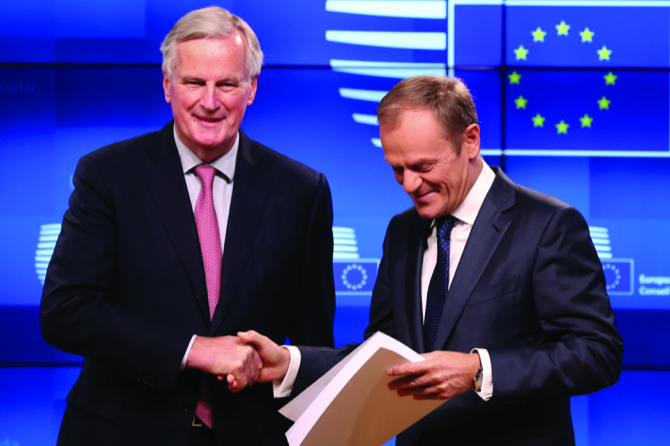 British Prime Minister Theresa May was battling yesterday to save both her Brexit deal and her job, as ministers quit her government and a growing list of lawmakers demanded her ouster over the divorce agreement struck between Britain and the European Union.

Less than a day after May won her Cabinet’s grudging backing for the deal, two Cabinet ministers and a handful of junior government members resigned, and a leading pro-Brexit lawmaker from May’s Conservative Party called for a no-confidence vote in the prime minister.

The hard-won agreement has infuriated pro-Brexit members of her divided party. They say the agreement, which calls for close trade ties between the U.K. and the bloc, would leave Britain a vassal state, bound to European Union rules it has no say in making.

A defiant May insisted that Brexit meant making “the right choices, not the easy ones” and urged lawmakers to support the deal “in the national interest.” She said the deal was best for business as it would help maintain easy trade with Europe and would reduce uncertainty.

But she has been weakened by the resignation of two senior Cabinet ministers, including Brexit Secretary Dominic Raab. Hours after he sat in the meeting that approved the deal, Raab said he “cannot in good conscience” support it.

Work and Pensions Secretary Esther McVey followed Raab out the door. She said in a letter that it is “no good trying to pretend to (voters) that this deal honors the result of the referendum when it is obvious to everyone that it doesn’t.”

In another blow to May, leading pro-Brexit lawmaker Jacob Rees-Mogg called for a vote of no-confidence in May, saying the Brexit deal was “worse than anticipated.”

Standing outside Parliament Rees-Mogg said the deal agreed “is not Brexit” because it would keep Britain in a customs union with the EU, potentially for an indefinite period.

Under Conservative rules, a confidence vote in the leader is triggered if 15 percent of Conservative lawmakers — currently 48 — write a letter to the party’s 1922 Committee of backbenchers, which oversees leadership votes.

Only committee chairman Graham Brady knows for sure how many missives have been sent, but Rees-Mogg’s letter is likely to spur others to do the same.

Rees-Mogg denied he was calling for a party coup. “A coup is when you use illegitimate processes,” he said. “This is working through the procedures of the Conservative Party.”

He called for May to be replaced by a more firmly pro-Brexit politician, naming ex-Foreign Secretary Boris Johnson, former Brexit Secretary David Davis and Raab as potential successors.

If a confidence vote is held and May loses, it would trigger a party leadership contest in which any Conservative lawmaker can run. The winner would become prime minister without the need for a national election.

The turmoil prompted a big fall in the value of the pound, which was trading 1.5 percent lower at $1.2797 as investors fretted that Britain could potentially crash out of the EU next March, a development that could see tariffs placed on British exports, border checks reinstalled, and restrictions imposed travelers and workers — a potentially toxic combination for businesses.

A growing worry as Brexit day approaches is that companies will enact contingency plans that could include cutting jobs, stockpiling goods, and relocating production overseas.

May and her supporters say the alternatives to her deal — leaving the trading bloc without a deal or a second vote on Brexit — are not realistic options.

“The choice is clear,” May told lawmakers. “We can choose to leave with no deal. We can risk no Brexit at all. Or we can choose to unite and support the best deal that can be negotiated — this deal.”

News that a deal had been struck after a year and a half of negotiations was welcomed in Brussels and EU chief Donald Tusk called for a summit of leaders on Nov. 25 so they can rubber-stamp the agreement. 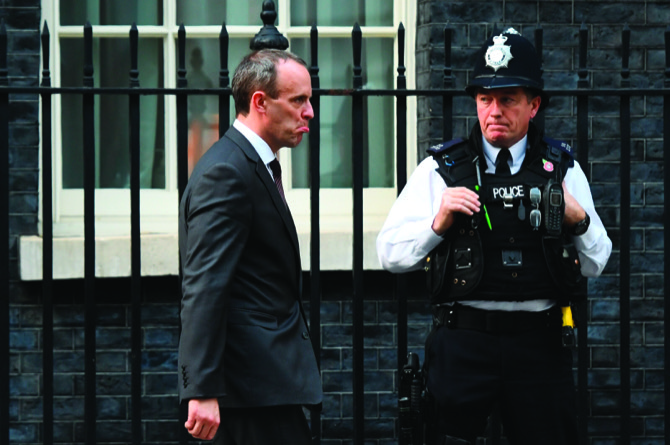 Tusk said it was “not for me to comment on the latest developments in London.”

The deal needs approval from Britain’s Parliament before the U.K. leaves the bloc on March 29 — and even if May survives as leader, the chances of that appear to be shrinking.

Her Conservative government doesn’t have enough lawmakers of its own to get a majority, and relies on the support of the Democratic Unionist Party from Northern Ireland, which says it will not back the deal.

The DUP leader in Parliament, Nigel Dodds, said the “choice” was clear.

Opposition parties also signaled they would vote against the agreement.

Main opposition Labour Party leader Jeremy Corbyn said May should withdraw the “half-baked” Brexit deal and that Parliament “cannot and will not accept a false choice between this deal and no deal.”

Ian Blackford, who heads the Scottish National Party in Parliament, said the deal was “dead on arrival” and urged May to “stop the clock and go back to Brussels.”

An EU official cautioned that Britain was unlikely to get a better deal. Speaking on condition of anonymity because the process is still ongoing, the official said both sides “exhausted our margin of maneuver under our respective mandates.”

The deal requires the consent of the European Parliament as well. Its chief Brexit official, Guy Verhofstadt, welcomed the draft deal as “the best agreement we could obtain.” Verhofstadt predicted the EU Parliament could approve the deal at the start of next year, well in time for Brexit day. AP