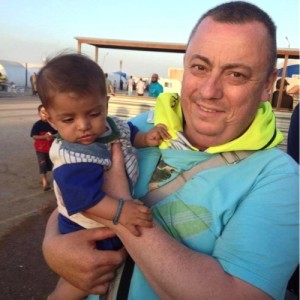 The wife of a British aid worker held hostage by the Islamic State group has issued a statement pleading for the militants to release him and respond to her messages “before it is too late.”
The Islamic State group, which has released online videos showing the beheading of two American journalists and another British aid worker, has threatened to kill former taxi driver Alan Henning next.
Henning, 47, was kidnapped in December in Syria, shortly after crossing into the country from Turkey in an aid convoy.
His wife, Barbara, implored the militants to “see it in their hearts” to release him late Saturday.
“Alan is a peaceful, selfless man who left his family and his job as a taxi driver in the U.K. to drive in a convoy all the way to Syria with his Muslim colleagues and friends to help those most in need,” she wrote in a statement released by Britain’s Foreign Office.
“His purpose for being there was no more and no less. This was an act of sheer compassion,” she said.
The aid worker was driving an ambulance loaded with food and water at the time of the kidnapping, Barbara Henning said. She added that the militants have not responded to her repeated attempts to make contact.
Her appeal came after dozens of Muslim leaders in Britain urged the Islamic State group to release Henning.
More than 100 imams and Muslim organizations signed a statement expressing their “horror and revulsion” at the murder of three other hostages, including Briton David Haines.
They said the extremists were “not acting as Muslims” but as “monsters.” Sylvia Hui, London, AP