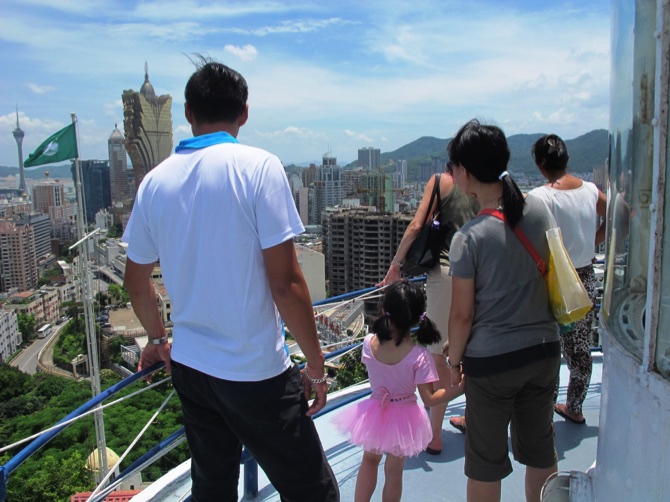 Tourists view the panorama from the Guia Lighthouse

A United Nations body under the purview of UNESCO has criticized the MSAR government over its handling of the preservation of the Historic Center of Macau.

A World Heritage Site since 2005, the Historic Center of Macau is currently one of the topics under discussion at the 41st session of the World Heritage Group in Poland, which will conclude on July 12.

According to UNESCO, “Decision 41 COM 7B.87” has now been adopted by the organization, outlining the dangers facing the cultural integrity of the Historic Center of Macau.

“It has been adopted without amendments and without discussion,” Lucía Iglesias, a UNESCO press officer told the Times last night.

Among other issues, the document highlighted “serious concerns” regarding “adverse development projects” and the danger to heritage sites posed by violations of the building height restrictions at the Macau Fisherman’s Wharf and other locations.

According to the Decision, the committee noted its regret with “the lack of progress with the completion of the [urban] Management Plan, which was due for submission by 1 February, 2015, and reiterates its request to the State Party [Macau government] to complete this Management Plan as a matter of priority, and to submit it to the World Heritage Center.”

Following the adoption of the document, the Macau government will now be asked to complete a Heritage Impact Assessment for future and planned development projects, which should then be submitted to the World Heritage Center for review.

The local government has been asked to submit an update on the state of conservation of the Historic Center of Macau by December 1, 2018.

The President of Macau’s Cultural Affairs Bureau (IC), Leung Hio Ming, informed last week that the government department would be sending a representative to the 41st session, along with a delegation from the People’s Republic of China State Cultural Heritage Administration.

“The wording from the World Heritage Center isn’t that strong,” Leung said at the time. “It is just a formal way to address the issue. It is an important issue and we are concerned with it, but […] it is just a list of points that we have to work with [before] the end of 2018.”

The IC president was referring to the Draft Decision, published on May 19, which has now been adopted without amendment. It is not clear whether the bureau raised an objection during the meeting in Poland or previously in its correspondence with UNESCO.

In a statement released on Saturday, the Concern Group for the Protection of the Guia Lighthouse praised the adoption of the document.

The group said that the Decision reflects the will of people in the city, who are seeking to protect W\world heritage.

The concern group was established in response to the construction of a residential building close to the Guia Lighthouse that contravened a legal height limit regulation issued in 2008. Construction on that particular building began prior to the issuing of the 52.5-meter cap, by which time the residential project already exceeded 81 meters in height.

New Macau Association members met with Rössler last December to express their concerns over what they described as a violation of heritage regulations. The members returned with a warning for the government: halt the controversial project or face repercussions from the international community.